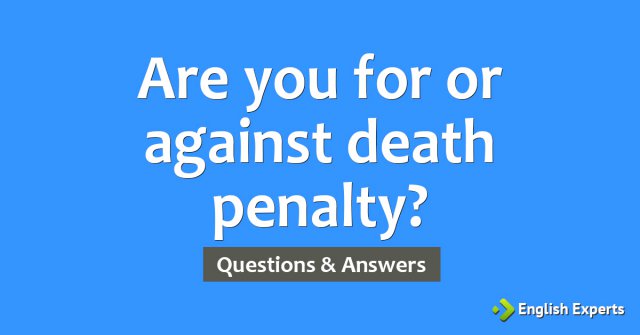 kah_honma 20 07 Jun 2014, 14:56
As for as I'm concerned I completely agree with death penalty JUST for obscenes crimes, like rapes, murders and torture.
Votar 0

For sure, this question is very conturbate and requires more reflection in such a way that the whole society takes place on that.
Votar 0

AnaLuiza 06 Ago 2012, 11:49
I´m not in and either out, but I think that in some cases it will help to keep the respect.
Votar 0
MENSAGEM PATROCINADA O início de uma conversa é importante, porém devemos ir além do simples "Hi, how are you?" ou o "I’m fine, thank you". Faça o download do guia "Perguntas e Respostas Simples" da English Live e destrave seu inglês.

ernando 30 •2 Top Posters - 02 Ago 2012, 13:20
I think that Death penalty is not the better way to fix the problem, but as many people have already talked some crimes requires this kind of penalty depending on its severity.
Votar 0

leandrocs1310 25 Top Posters - 05 Out 2010, 15:14
I am against death penalty. Why? Because I think the act of killing human beings is not our right to do. God gave us the life and we shouldn't undo that, even of other people. By the way, the person who made the crime won't pay it if he's dead, if someone is for death penalty, they worry only for themselves, they are being selfish, because they are not caring about who made the crime and who was victim, because the criminal won't get a better person, won't pay for what he did and he won't learn that he shouldn't be a criminal, he has to learn, he has to suffer the consequences of his act, it's the Law of cause and effect. And the victim won't be paid and rewarded. The death penalty has the objective to eliminate bad persons from the Earth surface, this is like a selection of who will live here!
So, I'm against death penalty.
Votar 0

ailime 80 •1 Top Posters - 04 Out 2010, 09:25
I am totally against the death penalthy, because I think that it won't be enough to make up for the irreparable loss.
Furthermore, it's a reward for the criminal, once he/she won't suffer anymore, while the family won't never forget that horrendous crime.

Dude Spell 145 •2 Top Posters - 04 Out 2010, 00:36
Death penalty should be applied in some rare cases of heinous crimes, but the problem is much deeper than that: is there any 100% reliable legal system? In my opinion, we should answer this question before someone has the right to sentence someone to death.
Votar 0

In implementing the death sentence the state should be required to use as humane a method as possible.
Votar 0