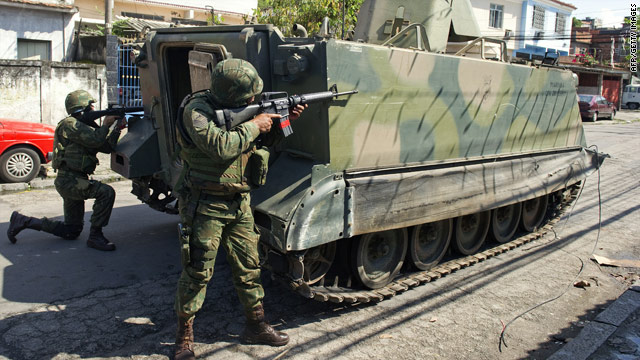 Earlier Friday, Defense Minister Nelson Jobim met with the governor of Rio de Janeiro state, Sergio Cabral, and security authorities of the federal and state governments. The Army agreed to make available 10 armored vehicles and the Navy offered three helicopters, according to the news agency.

Marcio_Farias 1 24 213 Expert Member · 27 Nov 2010, 17:52
Do the forum users believe now Rio de Janeiro will finally drive all the criminal gangs out of town? If the forum users do, do you think displaced criminal gangs will seek shelter and refuge (and eventually rebuild their [drug] empire) in other States? With reference to criminal gang displacement, should the other States do as Rio de Janeiro now does? Should our federal authorities institutionalize the death penalty or not? Would you join a lynching mob? Tell us why not!
Votar

Adriano Japan 2 20 Expert Member · 28 Nov 2010, 14:30
I personally believe this is the beginning of the peace, urged over decades by the people of Rio.
Of course we cannot blindly hope in the crime rates going down to the bottom, but from this sunday forward, the people can celebrate a life without bullets flying over their heads and mace bombs in their eyes.
I hope Dude Spell is sound and safe, far away from the mess