Coke or Pepsi? Which one do you prefer? 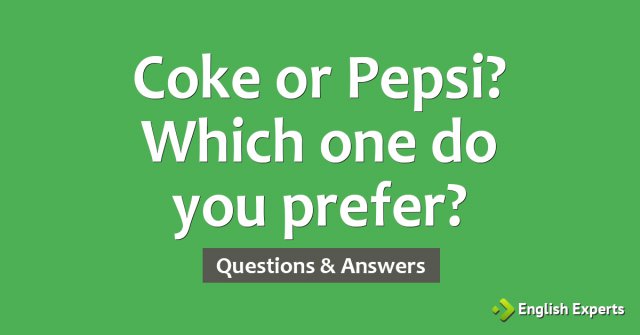 - Coke tastes much better!
- I prefer Pepsi because it is sweeter and cheaper.
- Whatever! They taste the same!
- May I have some water instead?
- I don't usually drink any soda.

1_2_trad 23 Fev 2012, 17:31
I tried to have some Pepsi when I was 14 or so (yes, the peer pressure in my lifetime...) and hated that.
Years later, I had a very good time watching people drinking Coke from different parts of the world when I visited the Coca Cola Museum in Atlanta GA...;o)
beatriz
Votar 0

Frank Florida 210 •5 Expert Member - 14 Jul 2012, 22:18
If I have a choice between the two I prefer coke, but I'm actually trying to get over my soft drink addiction... if you wanna have a drink, dry a hard one instead... like water! Haa. Recently I've been mixing fruit juices with sparkling water or soda water, it tastes like a soft drink but it's a LOT more healthy.
Votar 0