A pot pie is a type of baked savory pie with a bottom and top completely encased by flaky crusts and baked inside a pie tin to support its shape.(Wikipedia)

Kibbeh is one of the most characteristic foods of Levantine cuisine. It is widespread in Syria, Lebanon, the Palestinian territories, Jordan, Iraq, Turkey, Iran, Cyprus (where it is called koupes or koubes), Egypt (where it is called koubeiba), the Arabian Peninsula, Armenia, Israel and several Latin American nations which received part of the Syrian and Lebanese diaspora during the early 20th Century, such as Brazil, Mexico or Honduras.(Wikipedia) 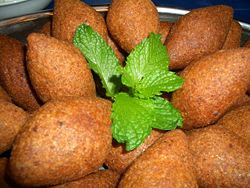