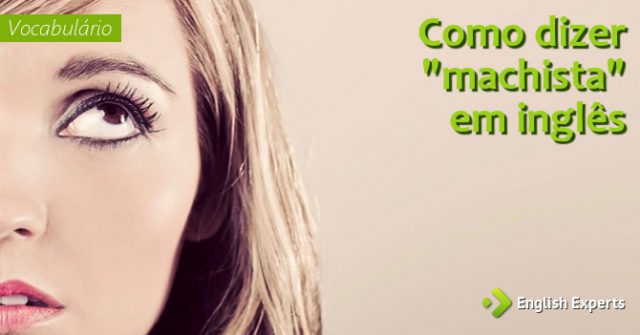 Male chauvinist: a man who believes that women are naturally less important, intelligent, or able than men, and so does not treat men and women equally. (cambridge dictionary)

"a strong sense of masculine pride : an exaggerated masculinity" (Merriam)
"male behaviour that is strong and forceful, and shows very traditional ideas about how men and women should behave" (Oxford)

- Like most beer ads, the TV commercial for Texas Select foams over with machismo. (time.com)
- But are the clear set of 1970s man-rules and machismo still appropriate today? (guardian.co.uk)
- The reality is the right to bear arms essentially is a machismo thing. (economist.com)

PPAULO 57755 •6 •43 •1029 Top Posters - 23 Set 2017, 12:42
Yep, by definition, mysogynist is "a person who dislikes, despises, or is strongly prejudiced against women or girls. So, it may come in whatever package indeed. Though, historically women are way less predisposed to that than men.
Votar 0

A culture that values machismo, it says, has "rigid gender roles."
And in the U.S. Educational system, those defined gender roles are being played out but not in the way one might expect. Male pride is losing out while Hispanic females are increasingly succeeding.
The data present a stark contrast between male and female educational success among Hispanics in the U.S.: 61 percent of all Latino college students are women. There's an almost 60 percent difference in bachelor degree attainment between the Latino sexes in the last 30 years. By the time children finish the third grade, they will have developed the pattern of learning that will shape the rest of their lives.
Regardless of how you measure it, Latino boys are falling behind. And increasingly researchers are saying the time-honored machismo culture may be one reason for that stark discrepancy.
At the Young Latino Male Symposium in Phoenix in October, scholars Luis Ponjuan of the University of Florida and Victor Saenz of the University of Texas said machismo is one of many sociocultural problems that present themselves in the early years of school, which, if unaddressed, "lead to many problems that will debilitate the Latino for the rest of his life."
"[Machismo culture] includes the set of behaviors and rules of conduct that are inculcated into boys by our society as being strong, tough and independent, showing no emotion," Saenz said. "And the idea of machismo only reinforces this through a cultural lens."
One result of the machismo is that young males may not want to ask the questions necessary to be successful in school, the researchers said.
Ponjuan and Saenz aren't the only scholars that see the machismo as an educational roadblock. Dr. Gilberto Q. Conchas, an associate professor of education at the University of California-Irvine, said machismo among Latino males shapes their social ambitions as well as their academic performance.
He told DiverseEducation.com many Mexican-American boys regard education as a feminine pursuit.
"Persisting and doing well in school is often seen being at odds with masculinity," Conchas said
But talk to young Latinos and they say that there are positives that come with machismo that they are reluctant to abandon. Chief among them is the devotion to family and the obligation to provide for the family, dedication and values that are admired in most cultures.
For David Robles, a Barrett Honors student at Arizona State University's Walter Cronkite School of Journalism, machismo is a code for what a man needs to be.
"It's macho. It's this masculine identity for a lot of Latino men," said Robles, the son of two Mexican immigrants. "We have to be supporters and the foundation to the family, and that's the most important thing to us."
Eldon Gomez, a Guatemalan who moved to the U.S. With his family as a toddler, says the idea of machismo is felt throughout Latin America. While it's extremely difficult to express in words, it's something engrained into every Latino boy from a young age: the idea that a man's man is the one who makes sacrifices for the good of his family.
"Machismo is tradition. Part of it is having the ultimate, final say as the man of the house," Gomez said. "It's so thick in the air, you can feel it. You can cut through it with a knife."
But while Robles and Gomez cling to those strong values, they also realize they needed to look beyond machismo to find success in the classroom.
Robles said he was fortunate because his parents were actively involved in his education, but said he saw others lose opportunities to learn by participating.
"If you're macho, you don't need to ask questions, you don't need to participate. You're in class, what more do people want from you?" Robles said. "But you don't get the full scope of your educational experience if you don't participate.
"And to participate actively is to stoop to a level… to interest yourself with something that seems trivial to them. And in that sense, people put themselves behind because they're not being proactive enough."
Family expectations and cultural conflicts manifest themselves early in the Latino culture.
"There are expectations you have to live up to, even as a little kid. Part of machismo is that you know it all," said Julian Cavazos, a Mexican-American from Texas' Rio Grande Valley. "So you might be scared to ask questions in school because people might think you're dumb. But if you do that, you can't progress your education. You can get bored real quick."
Scholars Ponjuan and Saenz said the simplest way to change the status quo is for successful Latino males to become role models, and for society in general to be more aware and more vocal about these issues.
"We can't remain silent on this growing epidemic. We need to act now, because our males represent an untapped resource in the intellectual and economic workplace," Ponjuan said. "We have too many of our bright, young kids either working low-pay jobs or in jail, when they should be in college. This is unacceptable."
http://cronkitezine.asu.edu/latinomales/machismo.html#

I had to quote a big chunk of it, because in this way we can see more widely the role of it. Because it´s role is interwoven with that of education. And we like to talk about our country, but in general it´s a worldwide issue. One only needs to see the number of female presidents that are ousted, and how fast! The role of women in the military, etc. And to look to other (so subtle) indications as well.

As for pronunciation, you can use Google Translator or HowjaSay and submit the word.
Votar 0

Andrezza, I would rather use other expression to it. Chauvinist is a word that is very related to men (with their perception of power and competitiveness) or to their interests - while touching the subject of macho culture and its so called values.
So, in practice, even being a female with a "female chauvinist woman" strategy, she will be lashed out (mainly) by other women, because her strategy is seen as of one person eager to please (no matter what). And for trying to get "honoray status" (that is, hoping men accept her in their club "as one of us" - men).

What I mean here, it´s not her fault no choice, she was of a time in which a macho culture was/is prevalent and she sincerely (and genuinely) think those values are right (for example, she is against her daughters-in-law and sides with her sons just because they are males - something like that.)
So, in the second case, it wouldn´t be about strategy or to get advantage, but from lack of a parameter of comparison (other that she have seen all her life.) Or something that she do believes it´s right on its own.

I understand that the concept is difficult because most hits on search engines deal with women empowerment and modern issues, along with the fact that that woman that genuinely would think this way would be in disadvantage. With consequences not only to her, but her children as well.
In addition to Donay´s comment - "Machista" can be also be translated into "macho culture". Just for variety´s sake here.

Oops! Second thoughts. Andrezza, you are spot on, since you were answering Angela Pereira, in that way, yes. So, you are right.
One more case of haste makes waste, but at least I brought other definition to the table! The more the merrier.

Don´t sweat it, anyway thanks for your feedback. What counts is that it somehow helped you out.
Votar 0