Does the incorporation of foreign words enrich a language? 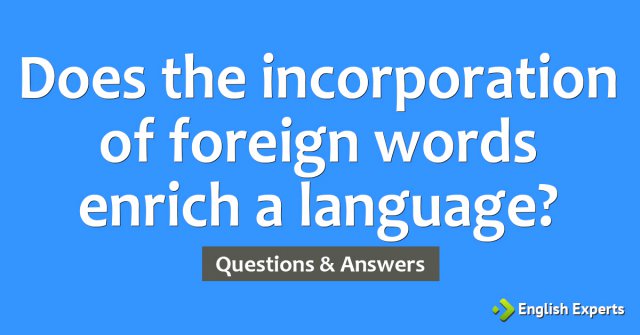 It does. In fact, it has always been a dynamic exchange. Portuguese has much influence from French, but has also influenced many other languages. New technology terms are created on a daily basis, and they are spread so fast around the globe that we don’t even have time to translate them. Information in general flow so fast that new words and idioms are incorporated to people’s vocabulary with the snap of a finger. We just have to be sensible and remember that there’s no reason to say “bowl” instead of “tijela”. We still have to value our own culture and language!

I take the liberty of quoting Marcelo Rubens Paiva:

Dude Spell 145 •2 Top Posters - 23 Out 2010, 14:22
I believe so. Not only enriches the language itself, but enriches the one that learns new concepts by learning a new word or expression.

I remember the first time I saw the word "brainstorm", I was like: "wow, that's great!"; since then that technique is part of my life.
Votar 0

BrunoCosta Top Posters - 27 Out 2010, 01:04
I think it's just something normal and necessary.There's no way to avoid the fact that some words will be taken from other languages.It's much better then create another word just for this case.It's much more interesting use words from other language to something that we don't have named yet.
Votar 0

Marcio_Farias 12560 •1 •23 •212 Expert Member - 27 Out 2010, 09:27
For what it seems worth, some of you may have heard utterances such as "O computador não quer 'startar'", "O software não tá 'backupeando'" some of the time. Not so curiously enough, some of these utterances found their way into, or forcefully ended up in, in the majority of the Brazilian Portuguese dictionaries.

No matter what I say, foreign words may (indeed) enrich a language, but we speech users should carefully employ them, lest we start massacring our own mother tongue.
Votar 0

paulom 29 Out 2010, 10:05
Hi, I'm new here and this is my first conttribution. I think there is just one situation we can consider the incorporation of foreign words enrich our language: when there is no word to express an specific meaning. We don't have any reason to say deletar instead "apagar", "dar" boot instead "reiniciar" and so on. We must remember the language is a strong mean of culture spreading and domination. Let's make the question in another way: how many portuguese words are incorporated to the english language spoken in USA? I'm sure there aren't so much, pearhaps no one! Otherwise do we have to agree with the idea of language enrichment just make sense to portuguese one? Liisten, I'm not a stupid anti-USA man and I'm so sorry if I make someone understand this way. I'm just a "pró-portuguese" (can I say that?) speaker trying to learn to speak english.
If I write something wrong or if you don'n agree with me please let me know.
I nice weekend for everybody.
Votar 0

leandrocs1310 25 Top Posters - 13 Nov 2010, 00:24
Of course, foreign words help us developing our communication, it improves our vocabulary and our language gets richer.

So it's very important.
Votar 0

ernando 10 Top Posters - 12 Jul 2012, 22:29
It's always good to receive new words and adapt them to our usage, and our grammar, for example I love to write words like "deletar" and "laser" that derives from Engglish. But some people use other languages' words exceedingly, it seems like the foreign culture is better than ours, and it's not true! There aren't better cultures in the world, just different cultures.
Votar 0
MENSAGEM PATROCINADA Aprenda a falar sobre as características e funções de sua profissão em inglês. É um conhecimento importante na hora do networking, faça o download agora do guia da English Live.