Is Brazil economically better today than 10 years ago? 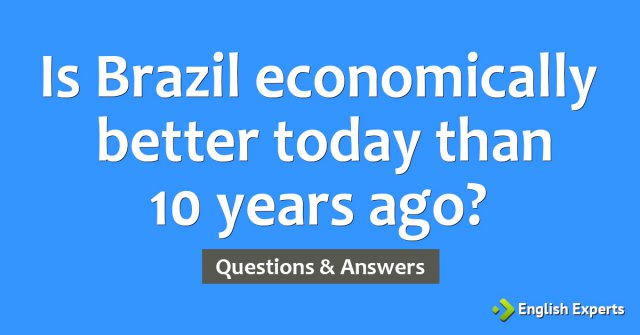 "(...)many Brazilians themselves tended to believe the notion—(...) that "Brazil is not a serious country."
""This is a different Brazil than 10 years ago, " President Luiz Inácio Lula da Silva boasted recently."
"Brazil in 2007 discovered mammoth new oil beds beneath the Atlantic that are expected to double output in the coming years—generating billions of dollars in new revenue annually."
"Yet another obstacle to growth is a lack of infrastructure"
"things will look better as Brazil gears up for hosting soccer's World Cup in 2014 and the Summer Olympics in Rio de Janeiro in 2016"
"Crime is still a big problem in most cities "
"Brazil's politicians and legislators often run afoul of the law, as well"

Question: Is Brazil economically better today than 10 years ago?

My answer: I do agree with the author when he says that "the country has enormous challenges it must overcome before it can fully live up to its potential". But I also believe that it do not depend only on our government to be done. The first step: Brazilians have to start to believe that Brazil is a serious country.

We might have different opinions from each region of the country.
Votar 0

josneywat 315 •6 Expert Member - 30 Mar 2010, 12:15
I was raised in what the Brazilians call 'south' and there I see a Europeran country in Brazil (maybe less developed than the average European country) but it's Europe, no shadow of a doubt. But.... I see Brazil as a highly independent body today than it was back in the day... We can live long and prosper as our ancestors once expected....
Votar 0

RenanKenplers 70 •2 Top Posters - 02 Abr 2010, 08:54
Honestly, I really think Brazil is much better right now! These times we've been standing under the spotlights, figuratively. There are lots of celebrities coming here in Brazil in a row! Every month you're warned that some band, or a very famous singer is here.

The per capta income has also increased, indirectly meaning that the country's economy is performing well, I believe. Many people have been leaving the absolute poverty [living with less than 1 reais a day]. But a negative point is that this income is not distributed equally to all regions.

I read an article describing our country as a land for investors, once we are consumerist people. The automobilistic market is growing so quickly that some automobilistic multinationals are thinking of placing their factories here in order to make great deals with Brazil. And not relating only to aut. multinationals, it is said that some others are coming, but these ones particularly I don't know.

The expansion of Petrol market here in Brazil is also increasing rapidly. The consequence of it all is just beneficial to our country, and it is just a prove that our country is able to get its place among the greaters. But we need to stop criticising Brazil as if it were a lame country! Before making preconcepts about Brazil, think carefully, and just get a newspaper and you will see what's cooking around.

Lu Interact 40 Top Posters - 02 Abr 2010, 09:24
I agree that Brazil is definitely much better today than 10 years ago. However, we still have a long way to go. In the World Bank ease of doing business report Brazil ranks 129 which is behind countries like Nigeria, Uganda, Vietnam and Albania. Things could improve so much faster if the bureaucracy was not so stifling to doing business. Even the recent legislation to make it easier for micro-enterprises to register and do business, is complex and lengthy.

Lu Interact escreveu:In the World Bank ease of doing business report Brazil ranks 129 which is behind countries like Nigeria, Uganda, Vietnam and Albania.

That is sad. Although I think when things are rolling well, chances are better for Brazil's economy and deals increase.

maryziller 355 •1 •1 Expert Member - 06 Abr 2010, 03:25
Real estate prices have risen tremendously during the last 10 years. It used to be possible to buy beachfront properties for a fraction of what you would have to pay in an American costal city. But now it is not cheap to buy a house or condo in Brazil.

Agriculture has expanded in Brazil, espeically in the sugar and soy industries. Ethanol has really bailed the energy industires out. From an outsider's point of view, it looks like Brazilians are better off than ten years ago.
Votar 0

Lu Interact 40 Top Posters - 07 Abr 2010, 11:27
Unfortunately, bio-fuels and soya farming are good economically but short of an ecological disaster for Brazil. So, in the short term, yes, better off, but not sure it is the best way for the country to move forward.

Just some food for thought....
Votar 0

In the past ten years Brasil has made extraordinary progress, and the economy is in a much better condition going forward than many other developed countries. While it is true that the World Wide Recession has taken its toll on all economies, Brasil has weathered the economic storm in relatively good shape, and is poised to become an ECONOMIC SUPER POWER.

In order to expidite the transformaton to a Super Power, I believe some changes are in order: 1. The ghettos (favelas) need to be reduced and eventually eliminated by providing a good education to all of the children of Brasil; 2. Reduce and eliminate drug trafficking through more forcefull enforcement of laws, and sealing of the borders by the Armed Forces. 3. Reduction of crime through education, enforcement, and providing opportunities and hope for all; 4. Encourage private enterprise by changing the laws to make it easier for citizens and foreigners to do business in Brasil; 5. Privatize some government services and improve the overall efficencies of all government services; 6. Wisely and carefully develop and use the tremondous resources of Brasil, both natural and human, while protecting and preserving them for future generations.
Votar 0

Gustavo Dias escreveu:Yes, I think is really better economically, but I think the polititians are worse!

Gustavo, I would like to suggest that you change your sentence to read, "Yes, I think Brazil is really better off economically, but I think our politicians are worse!"

Now that I have made my grammar suggestion, I have to also express my opinion on the politicians, I do not think yours (Brasilian) are worse than ours (US) the real difference is that our politicians have had lot more experience in being sneaky, and have raised "sneaky" to an art form.

Logan18 30 Top Posters - 22 Jun 2010, 12:06
Brazil is in a constant progress, I really like Lula as our President, but If the subject is politicians I think in Brazil nor the worst criminal is more sneaky than a Senator, and I also totally agree with everything Renan said little time ago at this topic.
Votar 0

Logan18 escreveu:Brazil is in a constant progress, I really like Lula as our President, but If the subject is politicians I think in Brazil nor the worst criminal is more sneaky than a Senator, and I also totally agree with everything Renan said little time ago at this topic.

I would prefer to see the following construction.

Brazil is in a constant state of progress, and I really like President Lula and his programs, but if the subject is the other politicians I think that even the worst criminal is not as sneaky as a Senator. I also totally agree with everything Renan said previously in this topic.

Most of the changes are very minor and combine to make everything flow together.

I hope this makes since to you.
Votar 0

dudac escreveu:Yes! This is fact! Brasil is much better today. Had a change radical in economy.

I would like to suggest that your post be changed to read something like this, "Yes! It is a fact that Brasil is much better today than she was 10 years ago, and this is due to a radical change in the economy."

I hope this helps your study of English.
Votar 0

Vlamir 28 Jun 2010, 23:31
I believe that Brazil has become one of the most economically country in the world and has much more to grow in the next years.
Votar 0

ailime 80 •1 Top Posters - 29 Jun 2010, 07:43
yes, surely it is. Brazil`s economy grew 9 percent year-on-year in the first quarter fueled by strong investment and domestic demand, despite the growing crisis in Europe. This growth has heighten concerns the economy is overheating and led the central bank to hike interest rates to curb inflation.
Votar 0

ailime escreveu:yes, surely it is. Brazil`s economy grew 9 percent year-on-year in the first quarter fueled by strong investment and domestic demand, despite the growing crisis in Europe. This growth has heighten concerns the economy is overheating and led the central bank to hike interest rates to curb inflation.

How about a few suggestions?

" Yes, it definitely is. Brazil's economy grew at an annual rate of 9 percent in the first quarter of this year fueled by strong investment and domestic demand, this growth was in spite of the growing crisis in Europe. However, this rapid growth has heightened concerns that the economy may be overheating and led the central bank to increase interest rates as a curb on "possible" inflation.

Definitely is stronger and more appropriate in this context, at an annual...this year is better grammaticly and the meaning is correct. In spite of is a much better choice as it is a positive phrase, and some say that despite is slang (personal preference here). "However, this rapid ... has heightened, is a better use of words and proper tense for heightened. While hiked is proper I prefer the more definative "increased". I think that possible is more correct here because an increase in the inflation rate has not been positively identified.

I hope you understand the above suggestions and that they help your studies.
Votar 0

ernando 10 Top Posters - 13 Jul 2012, 19:09
If Brazil is better than 10 years ago, I must say that there were lots of changes, but it still having great problems on main issues such infrastructure, education, health and security. I must say too that I didn't believe that we would get where we are right now, so every single step our country takes is still short, but it's beneficial, therefore we can't complain, the only thing that we can do is act in favor of one goal to our population, because the change need to start from every single person, we can't just wait to better days, we need to go after them!

ernando escreveu:therefore we can't complain, the only thing that we can do is act in favor of one goal to our population, because the change need to start from every single person, we can't just wait to better days, we need to go after them!

Of course we CAN complain!

Actually, we MUST do it! I think we do it too little for a country with so many problems as well as the infinite corruption of our politicians!