Is there any chance English can be replaced with Spanish? 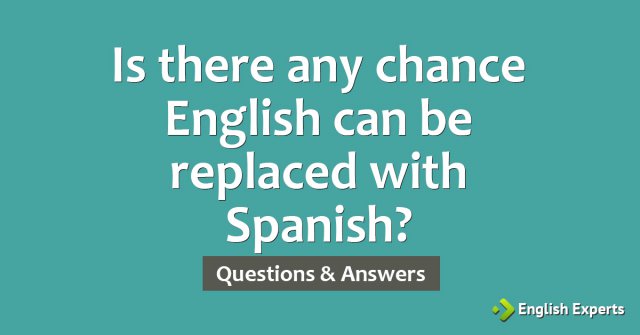 Answer: Spanish can help Brazil to increase opportunities in Mercosul, but I’m sure it won’t replace English. Regarding Mandarin, I believe China is becoming a great economy, reason for US to start getting preoccupied about. But I also think Chinese people are aware their language is very difficult and can stop some commercial business; and they have already showed how hard-working they are when it comes to studying English!

RenanKenplers 70 •2 Top Posters - 01 Abr 2010, 20:22
I agree with you Flavia, but chances are that english would never be replaced, at least by the spanish language. Mandarin? Mmhm of course China's in an ongoing work that causes rapidness to its development. It is changing so fastly that makes you dizzy, I think. As clear as it shows itself, and as a consequence, China's language would be in greater number as the Country achieves its objectives [being the #1 potence in the world] and it is natural. But at this moment, english still is in the position they have been so far. And I agree when Flavia says that Mandarin is a difficult language to learn. Taking it from this viewpoint, we see that English, even if China is declared as the 1# potence, will still remain in its place.

I think that Mandarin is very very hard work, you need learn draw simbols to know , another pronunciations.... and consequently you spend many years ever you get a teacher drumming into.

You don't find out enough stuff so easy like English.

I wounder that the most of people in the world are learning English as second idiom when you go to any airport in the world you certainly see warning sign in English.

After learning English, Spanish would be a good ideia, but Mandarin...
Votar 0

maryziller 355 •1 •1 Expert Member - 06 Abr 2010, 02:13
More and more people are learning Mandarin. It is sure to be a major player soon. The sheer numbers of speakers of Chinese outnumber English speakers. In the US Spanish speakers are gaining ground; their birthrates surpass non-hispanic citizens.There are bilingual schools to accomodate Spanish speaking students in areas densely populates by people of Hispanic origin.
Votar 0

Gustavo Dias 25 Top Posters - 09 Abr 2010, 18:37
Overall no.
The English language will always be the most worldwide language in the whole world. And the trend is about to increase through the years.
But, it's important to have fluency in Spanish too, because it's the second most important language in the world. In South America for exemple, a great part of times English will be replaced by Spanish...
Votar 0

Logan18 30 Top Posters - 22 Abr 2010, 16:06
Well guys, I agree with Flávia about spanish, but today is such necesary as english to become fluent in spanish here in RJ mainly there are several companys originates from Spain. With that we have chance to change knowledge and learn another important idiom. Regarding Mandarin I don't remember where but I read some news regarding this idiom saying that it will be important learn mandarin because the commerce between the biggest economies in the world, Brazil is not out of this group.
* Remember one day we'll be the great global economy, because we have many commodities and products that foreign countries do not have..
Votar 0
MENSAGEM PATROCINADA Você ainda se confunde com os tempos verbais em inglês? Faça o download do Guia de Tempos Verbais em Inglês oferecido pela English Live. Ele tem um resumo bem estruturado para você revisar os conceitos que aprendeu na escola.

danilorpo 5 12 Mai 2010, 11:52
I'm not sure Spanish can replace English, however I think German can do it. If you don't know, German is the most spoken second language in Europe. There is a risk with every language that becomes so popular, they can disapear. Have a look what happened with Latin. Latin was the most spoken language in its time. However, people who use it, get started to change it to their ways. So, Now we have portuguese, italian, french, spanish, and so on. Some of you can't agree with me. But I'm not saying that English will disapear.
Votar 0

leandrocs1310 25 Top Posters - 02 Nov 2010, 09:18
I don't think so, we've seen that the most powerful nation decides that, then, the USA! People all over the world speak the language they will mostly use for business and to go to a developed country, so I think English will still be the most spoken in the world (in importance). Otherwise, English is easier than Spanish (not for us, 'course), although English is also difficult, why didn't the world choose Esperanto? It's so much easier!

Concluding, if the USA changes his language to Spanish, the world will speak Spanish!
Votar 0

OtávioGaião 5 02 Nov 2010, 19:38
Spanish will never replace English. Most of the country where spanish is the oficial language are poor (bolivia, venezuela....), while English is spoken in England, USA, Canadá...
Now, about Mandarin.... I think It has no chance to become more important than english.
Votar 0

felipeh6 2255 •7 •56 Expert Member - 06 Abr 2012, 10:38
I don't think so. As a language, English sounds really better than Spanish and any other language. Besides that, its structure is easier to comprehend. Sorry to say, but Mandarin is a mess and too much complicated, even Chinese people don't understand each other, no chance!

I like so much English, I really want that it still in its place like the Global Language, it's not about hating Spanish, the real thing is that I don't like the way Spanish sounds like. And about Mandarim, well it can happen because of the growing period it's experiencing, but people says that it's really hard to learn Mandarim, so if it happen, it will take a long period of time to be done, maybe not in our existence.

vixcamus 10 Abr 2012, 21:02
I think Gustavo summarized well. Although China's economy is increasing day by day, the influence of English language in the whole world is incomparable. English as a global language is used for communicative purposes. Mandarin may be learnt for commercial reasons, but it wouldn't be the second language for many people. The difference of English to other languages is the fact that it is a worldwide language, a scenery which I believe that is soon to change.
Votar 0

leandrocs1310 escreveu:I don't think so, we've seen that the most powerful nation decides that, then, the USA! People all over the world speak the language they will mostly use for business and to go to a developed country, so I think English will still be the most spoken in the world (in importance). Otherwise, English is easier than Spanish (not for us, 'course), although English is also difficult, why didn't the world choose Esperanto? It's so much easier!Concluding, if the USA changes his language to Spanish, the world will speak Spanish!

emersonozzie 04 Mai 2012, 09:50
There is no chance. The English always will be the first language around the world. The chinese language is a hard language, is more easy everyone learn English to communicate in business world. Everyone know that in few time chinese Economy will be the first around the world, but it is no mean that all world need to learn Chinese, the own Chineses has known great difficulty in others people in learn Chinese,therefore they have studied so hard english.
Votar 0

I think both are very importante in terms of economy and I'm sure that english will never be replaced by spanish or mandarim,portuguese. why?

Spanish,portuguese,mandarim are very important but english language have years of history and (nos dias de hoje) english definitely can not be replaced.
Can you imagine 1,8 billion(natives and speaking like a second language by wikipédia) of People need to learn Spanish? could be is a global disaster.
However is a good question to do in the next 10 years.
Votar 0

Rurouniken 13 Ago 2013, 14:12
Hello Everyone!
Never! I guess, because English became the language more spoken in the World, so I don't think that the Spanish language would be more spoken than the English one day.
Anywhere you go and if you don't know how to speak the native language of the place you are, of course that if you speak English the people will speak with you.
Votar 0

learningrafa 40 •2 03 Set 2013, 00:36
I think that English will keep the status of the first universal language. The origin of the english language have common sources of other influent languages around the world and it's makes the learning process easier for many people of different nacionalities. And about the chinese development, China is a country of social inequalities, and even it's getting more and more financially prosperous, the poverty of millions is a ghost that the chinese government needs to fight first off all. The Spanish is a strong language and following english, it's the most popular language nowadays.

The origin of the Englsih language has* common sources from* other ingluent... and it* makes the learning process easier for many people from* different nacionalities.
and even though* it's getting more and more... first of* all.

I think these are the mistakes.