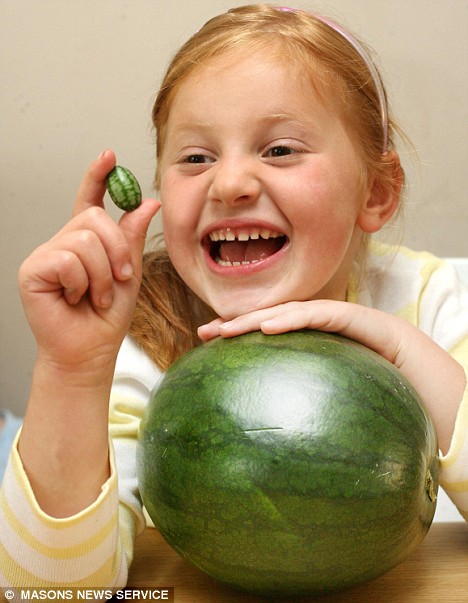 In a world where small is king, perhaps it was only a matter of time.
But while consumers may covet tiny technology, such as mobile phones, MP3 players and computers, it may not seem quite such a good deal in the grocery aisles.

Nevertheless the Pepquino micro-melon is certain to cause a stir.

Measuring about an inch from tip-to-tip, it is 20 times smaller than its traditional cousin, but with an almost identical skin colouring.

Worry not. It is not part of some vile Frankenstein Food experiment, but is 100 per cent natural.

A wild fruit, the Pepquino was discovered by Dutch food producers in South America who brought it to the Netherlands and cultivated it in greenhouses.

While it resembles larger varieties, it has a fresh crisp taste similar to a cucumber and juicy light green flesh.

For those wondering how on earth you scoop the fruit out, there is instant reassurance - the skin is soft and edible. Even better, the pips are edible too. Producers Koppert Cress say it can be eaten as a snack or appetiser, like the olive, in a summer salad,

stir fried or made into a sorbet and teamed with dark chocolate.

They are confident that, with its distinctive appearance and slightly sour taste, it will become the fashionable food of 2009.

It's understood. It won't happen again.

Keep up the good work!
Votar