What does Dunga have in common with Parreira? 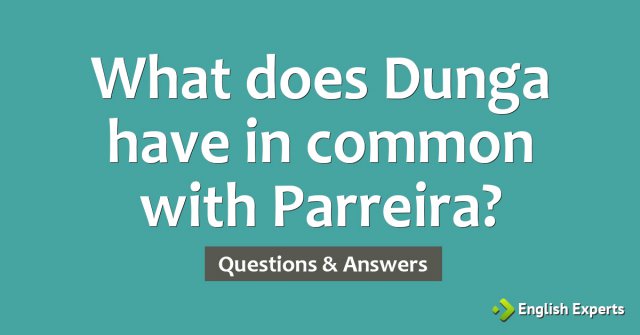 On July 24, 2006, Dunga was named as the new national coach of the Brazilian national team as a replacement for Carlos Alberto Parreira, even though he has no prior coaching experience at professional level. (…) Zagallo has recently declared Dunga's work as the head coach of the Brazilian national team is very satisfactory.
(…)
Unlike Parreira, Dunga has focused on the task of unemphasizing all players and treating them as equals. He did not just look for players on popular clubs, (…) but looked at the whole scope of Europe, finding individual talents (…). He also looks for players from local Brazilian clubs (…).
Source: Wikipedia

“Parreira, in charge of World Cup hosts South Africa, said in an interview with Reuters he believes tactics aimed at obtaining results are the best route for Brazil's bid to win a record sixth world title in the finals starting on June 11.”
(…)
“Appointed to succeed Parreira after the 2006 finals in Germany, former captain Dunga gave his Brazil a similar game to the way he played, at times using three holding midfielders and relying on counter-attacks to score.”
(…)
"The team are responding on the pitch and the results prove that. I think Brazil will be ready for the Cup, " Parreira said.
Source: Reuters

w.slayman 110 Native Speaker - 04 Jun 2010, 10:00
This "gringo" can not believe that nobody has expressed an opinion on a subject that I know is so important to the national identity of Brasilians. To me football (soccer style) is synonymous with Brasil and it ignites a transcendent passion in all Brasilians.

So come on guys let this North American know what you think about the new coaches.
Votar 1

And, of course, they were together when Brazil has won its 4th World Football Title, Parreira as the coach and Dunga as the captain.