What's the lamest excuse you ever gave or were given? 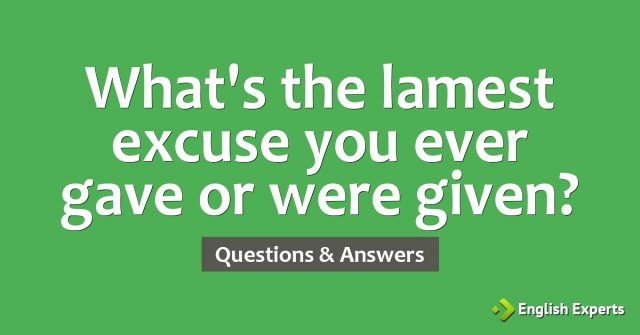 - When breaking up with someone: It's not you, it's me...
- To your boss: When I was about to finish, the computer crashed and I lost everything!
- To your husband: Not tonight dear, I have a headache.
- To someone who saw you where you shouldn't be: Me? Of course it was not me, it was probably someone very similar to me...
- When you forgot to call: I tried to call but I got voicemail!

Marcio_Farias 12570 •1 •23 •212 Expert Member - 15 Jun 2011, 06:35
At eleven when I attempted to fake my dad's signature on the school's report card. It contained so many failing grades. The school principal became suspicious and said to me, "Clearly, this signature doesn't belong to your father." He had caught me. He summoned my father to the school and told him outright I had no condition to continue studying there.
Votar 0

Marcio_Farias escreveu:At eleven when I attempted to fake my dad's signature on the school's report card. It contained so many failing grades. The school principal became suspicious and said to me, "Clearly, this signature doesn't belong to your father." He had caught me. He summoned my father to the school and told him outright I had no condition to continue studying there.

One small suggestion if I may, please consider changing the final sentence to something like this.

He summoned my father to the school and told him outright than under no condition would I be allowed to continue studying there.

I feel that the construction and word choice is slightly better.
Votar 0

w.slayman 110 Native Speaker - 23 Jun 2011, 17:26
Once upon a time in a far away land (Vietnam 1968) my Sergeant caught two Privates, Jones and Smith, asleep in a fox hole while on guard duty. This is a very serious offense, especially in a combat area, and the Sergeant brought the men to me, the commander, for possible court martial.

I asked Smith what he had to say for himself, and he replied, "Sir, it is all Corporal James fault, you see he gave Jones two six packs of beer while we were in the barracks, and Jones gave me one of them. We took the beer with us when we left to go on guard because we did not want someone to steal it. Later we got thirsty just sitting there in the fox hole, and drank one beer each, and before we knew it we had drank all the beer, and I guess we sort of passed out. But you have to remember, Captain, that if Corporal James had not given us the beer, we would not have drank it, and would have been awake, so Corporal James should be in trouble not us." Smith then said, "That's right Sir!"

This is a true story but the names were changed to protect the stupid.
Votar 0

Re: your story. If I may comment, the privates who served under your command surely offered you a lame excuse.
Votar 0

ENG_rafael 10 Top Posters - 02 Jul 2011, 23:29
Oh, sometime ago I said to a friend that I was very cold so that was why I couldn't play soccer with him and his folks. I was very pooped to play anything but I don't know why I guessed to be better give him that lame excuse. Because I'm not a good excuser, he probably realized that was a fake excuse and it helped to separate us. It is a long, long history, that would take me an entire day.

It is common to give excuses, but as I told before, I'm a terrible excuser, thus all my excuses are lame in such way.
Votar 0

The freedomly 10 05 Jul 2011, 20:40
I remember being invited to be a marriage's Godfather, then i told the couple, that exactly on that date, i was going to travel to São Paulo and i was going to come back after the date's marriage and to show them,to get seeing being truth, that i was telling the truth, i would show them the bus ticket to SP. huhuhu! And i went to the bus station to buy a bus ticket on the marriage's date to show them. And later in the day, i went to their house to show them the bus ticket, to highlight the truth. Of course! Spending money unecessary, cuz i didnt travel to SP. Besides, i had to be hidden all the time, including not answering the phone and also, tipping my family to answer the phone, in case were them, telling them that i still was in SP. And they didn't discover this yet, if they are member from the E.E. Now! They'll break it through. Huhuhuhu!
Votar 1

For a lot of situations, I think the lamest is that one of flat tyre (or flat tire). Every now and then, it is being used as an excuse!

And when it's truly true, you don't believe it's true!