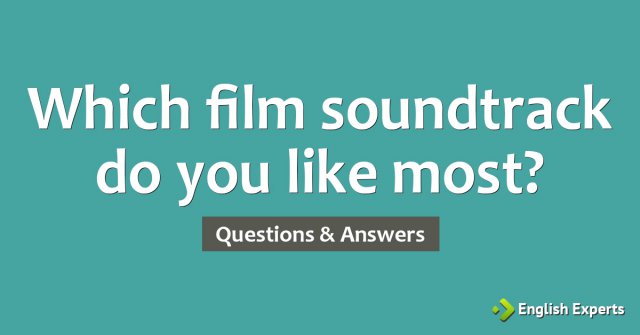 Some soundtracks are even more memorable than the films themselves: I don’t like the Tarzan film, but I love You’ll be in my heart, by Phil Collins.

I also like the instrumental of Pirates of the Caribbean.

nice tracks are there.
Votar 0

Ravenna 85 •3 Top Posters - 24 Mai 2010, 17:02
I've never thought about what film soundtrack I really liked but... let's see... The Phantom of the Opera is an amazing movie and oh the music..no comment.. The epic organ version of the movie's theme is beautifully haunting. Ah I cannot forget about the Queen of the Damned's soundtrack.. My favorite vampire... Lestat is a rock star and sings 'dark' songs - that are in fact performed by reality metal bands...awesome... that's all i can remember now...
Ravenna ^^
Votar 0

JacksonB 110 •2 Expert Member - 25 Mai 2010, 13:20
I'm not sure about my favorite film soundtrack nowadays...but for sure the Harry Potter films soundtrack was the one i heard the most so far.
Votar 0

w.slayman 110 Native Speaker - 05 Jun 2010, 11:45
This is an easy one, my favorite is "Laura's Song", also known as (AKA) the theme song from Dr. Zhivago. My second favorite is the "Colonel Bogie March" AKA the theme song from The Bridge Over The River Kwai. Of course there are many other great sound tracks and many have been named above.
Votar 0
MENSAGEM PATROCINADA Leia o e-book Aprendendo Idiomas por Conta Própria e conheça as técnicas utilizadas pelos Experts para aprender idiomas. Com ele você vai aprender a aprender inglês!

isabelladevonne 19 Jul 2010, 21:37
I was simply in love with Avril Lavigne's song, Alice - Alice in Wonderland. But I've got sick of hearing this song.
Votar 0

- I've never watched The Chronicles of Narnia: The Lion, the Witch and the Wardrobe, but I love "Wunderkind" by Alanis Morissette,

- I love the complete soundtrack of Tarzan, by Phil Collins. The most beautiful song in it is You'll be in my heart, worth watching:

The entire soundtrack of the movie August Rush. This movie is magical to me;
Farther Down, from the movie ''Can't Hardly Wait''.

at that time I was a young boy and these songs were my favorites.
Votar 0

Another one that I like is from the (amazing) movie "Into the Wild", with songs written and performed by Pearl Jam's Eddie Vedder.
Votar 0

ITIEL 01 Mar 2012, 12:33
the film soundtrack that i like the most is....terminator 2 ( when shwarzneger goes out of the nightclub and takes the gun and the sunglass off the guy at the door)
Votar 0

felipeh6 2255 •7 •56 Expert Member - 21 Mar 2012, 16:25
Well, I believe that when you talk about a movie soundtrack, you have to think about all the track list and not only about one song. In this way, I suggest the track list of "Pulp Fiction". It usually is together in several lists of best soundtracks ever.
Votar 0

It's undoubtedly the most beautiful soundtrack.In my opinion, of course

Guilhermo Murillo d 25 Nov 2015, 15:55
For me, Eddie Vedder´s solo album "Into the wild", soundtrack to the movie with the same name, is a masterpiece. It´s a great movie, but the soundtrack is even better.
Votar 0

that´s an outstanding one!
Votar 0