Who is the greatest role model of our generation? 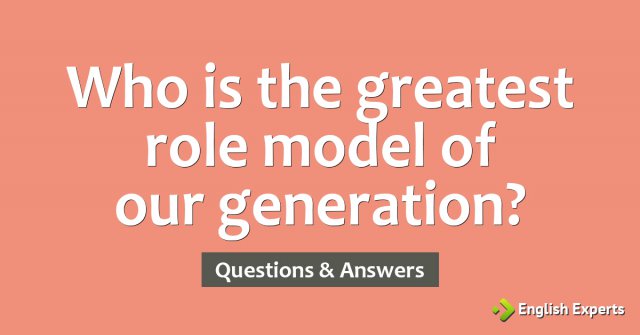 Ayrton Senna was much more than an excellent racing driver. Even after his death he's still teaching us about generosity. Undoubtedly, a very good role model of this and next generations.

Role model: someone whose behaviour is considered to be a good example for other people to copy (Macmillan)

I agree with you that Ayrton Senna was one of the best role models of our generation.Today,I believe that Father Fabio de Melo is a good example to people.In spite of being a priest,he is my favorite role model and has been sending a message of peace and change about life.

Logan18 30 Top Posters - 28 Abr 2010, 12:18
Ayrton Senna, Zilda Arns were examples of role models in Brazil specially because they help peolpe until today and I'm sure that many people remember them how they were: charitable, gentle, happy and generous. Helping people is a such good idea, would be so good if we could practice more this attribute like them.
Votar 0

w.slayman 110 Native Speaker - 24 Dez 2010, 05:05
Since I was born during WWII my generation is bookshelved by the "Greatest Generation Ever" and the "Baby Boomers", and since I am a North American my opinion will be influenced by the experiences of my life.

With all that being said there are two people who immediately come to mind, both of whom "pulled themselves up by the seats of their pants" from the black slums of America to eventually serve as the Secretary of State of the United States of America, and both were mentioned as potential candidates for President.

These two people have demonstrated that anyone can rise to positions of power and respect if they are willing to exert the effort and apply themselves. General Colin Powell and Secretary Condoleezza Rice are both true inspirations for the young people of today.

As a point of interest, you may wonder why I refered to Colin Powell as General and Coldoleezza Rice as Secretary. By American law once an individual holds the position of President, Vice President, Senator, Congressman, Secretary of any Federal Department, Governor, or Retired as Military Officer they are entitled to always be refered to by that title. In the case where a person has served in more than one of these positions he or she has the option to choose their title, which they prefer.
Votar 0

Educr1 25 •1 31 Jan 2011, 14:08
Alan Kardec was responsible to change milions of lives. The Spirit Doctrine was an important legacy to the mainhood and it has been studied more seriously nowadays.
Votar 0

Educr1 escreveu:Alan Kardec was responsible to change milions of lives. The Spirit Doctrine was an important legacy to the mainhood and it has been studied more seriously nowadays.

I would like to suggest several changes, in the form of a rewrite, please let me know if you understand why I made the changes, if you do not understand I will try and explain them.

"Alan Kardec was responsible for changing millions of lives through his Spirit Doctrine which is an important legacy to mankind, especially since it has been studied more seriously in recent times."
Votar 0