What did you learn from the last book you read? 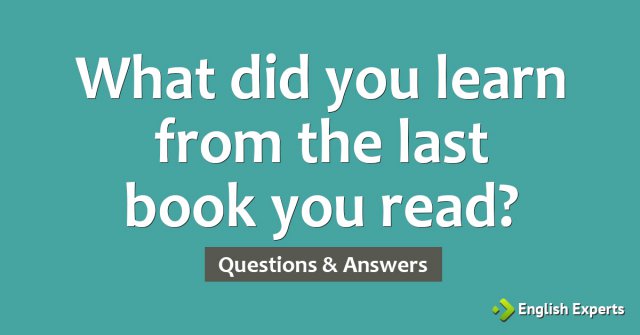 - I read The Notebook by Nicholas Sparks and learned how powerful love can be;
- I read Breaking Dawn a couple of months ago and learned nothing at all (just some new words in English).
- The last book I read was _, written by _. By reading this, I learned _.

BrunoCosta Top Posters - 27 Ago 2010, 07:42
I read A Casa Dos Mortos de Dostoievsky several months ago and i'm re-reading it now.I learned how perfect my personel world is really!Not just oppening the hole book for you guys but what an amazing writting even in portuguese.You learn how important is to have a space to think alone,have some moment to reflect about your life and this is what makes you TO REALLY have your own life.

Have any of you ever tried to write Portuguese without using the verb ser? It will make you use other active verbs, verbs you didn't even know existed. That will probably make you suffer from many trips to the dictionary as well.

"A friend in need is a friend indeed."
Votar 0

leandrocs1310 25 Top Posters - 07 Set 2010, 08:23
I read Salto para a vida by Célia Valente, she count's the story of Léa Manber, a Poland woman that lived persecuted by Nazi, she was Jewess, and now she is in Brazil, counting her story. I learnt there are a lot of people that can give you help when you need, but there are also very cruel persons in the world. I saw in this book the sacrifice that her mother had, and the courageous act of losing her daughter, but to the life, she pushed her daughter to a little window in a wagon of the Death Train, it was exactly the Jump to the Life.

Before that, I kept thinking that I'm passing through an enormous problem, that I don't deserve it, I'm not able to, and these things, but now I thanks God for my life, my problem is nothing, I can get it, I can pass over it, if Léa Manber survived to the War, persecution and death of all her relatives and friends, the destruction of her own home, I can survive to my problem.
Votar 0
MENSAGEM PATROCINADA O início de uma conversa é importante, porém devemos ir além do simples "Hi, how are you?" ou o "I’m fine, thank you". Faça o download do guia "Perguntas e Respostas Simples" da English Live e destrave seu inglês.

Count = contar (numbers)
Tell = contar (a history, facts, etc)
And the apostrophe shouldn't be there

And I hope God give you enouth courage to overcome whatever is bothering you.
Votar 0

ENG_rafael 10 Top Posters - 17 Abr 2011, 20:31
Well, the last book I read is Germinal, a novel by Émile Zola, that tells us a little bit about how difficult and dangerous was life for who worked at coal mines by the time that French was in its incipient industrial development. That book not only tells us about industrial growth and inauspicious conditions of working, but also about Socialism, how it rose in the heart of those people who worked a lot while a little class became rich and richer day after day. I loved reading that book because it was a good way of understanding how Socialism works without having to study it in fact.

Recently I also read a book called Keep The Alpidistra Flying, a novel by George Orwell, that tells us about a man who decided to declare fight against money. During the reading, the main character understood that without the enough amount of money we are nothing, just insects or less than it, our honor and self-respect depend on how enough is our income. To be honest, at the beginning I thought that book was a little silly, I mean, quite exaggerated, but after finishing the lecture, I began to agree with the writter.

For sure reading books is an excellent way of learning. If you want to change some life, you need some book. Unfortunatelly, I have no longer time to read, but always some opportunity appears, I open a book!
Best regards!
Votar 0

Dany Mysterious 11 Nov 2011, 11:55
The last book that I read was "the body speaks" written by Pierre Wiel and Roland Tompakow. It's about the several ways that our body can express feelings, without we never realizing it. it's a very interest book and after read it I can see better how many "languages" we can express through our body! Amazing! I recommend it!
Votar 0

Dourado 1115 •2 •23 Top Posters - 11 Nov 2011, 13:48
The last book I read was The Drunkard's Walk and I learned that basically everything is random and we don't have nearly enough information (meaning numbers of repetitions) to analyze a trend correctly (eg: if we flip a coin twice, we ca't say for sure that we will get one head and one tails, even though chances are 50% for each).

Oh! And that if I go to some game show like "Porta dos Desesperados" (I think only people over 25 will get this

), where we are presented with 3 doors and have to pick the one with the prize behind it, we should always change doors when asked. Our chances of winning will double!
Votar 0

rochesterj 11 Nov 2011, 14:38
The last book I read was "John" by Cynthia Lennon. It's just amazing, it tells how Beatles became "The Beatles" in a non-musically perspective, it tells a lot about backstage stories and how was John and Cyn's relationship.
Votar 0

EugenioTM 350 •11 Top Posters - 06 Dez 2011, 15:10
I've read 'mentes ansiosas' by dra Beatriz Barbosa Silva, and I've learned that we must respect people with mental desorders, because it's not their fault, those are deseases like any others, and that 80% of the global population had, or will have some problems with anxiety. I've found this one a really interesting book!
Votar 0

That book I read was Les Misérables .
Votar 0

Caio Machado 17 Jul 2012, 17:05
The last book I read was "Pulmão de aço" by Eliana Zagui, and I learned that we should enjoy the live and thanks, because there are people that are worse than we , a lot of people are sick and live at the hospital. I loved the book. It was a big reflection for my live !!! It's a real history !!
Votar 0

Rodrigo Duhau 07 Fev 2014, 15:57
I've just finished to read "Em guarda contra o perigo vermelho" by Rodrigo Motta. He is a historian. One of the parts of his book is about the relationship between Catholic Church and Communism. Motta explains with a lot of details how the church created representations against communists and helped to make persecutions against the Communism defenders, mainly in 1930s, in Brazil. The communists didn't give too much importance to God or family. That's why the Catholic Church built some representations saying the communists were devil's sons. Everybody has the right of not believing in God or family and of having a different explanation for the world of what the church tries to impose to us.
Votar 0

PPAULO 53895 •6 •42 •969 Top Posters - 07 Fev 2014, 22:40
I have read Twister a set of short stories, by Jeffrey Deaver, its plots lead you to think that it will end up in a certain way, and then they completely (or almost) change. The guy is a writer coach at University, turned novelist. I learned that life isn´t always all it crack to be, but then, I knew that already.

The Antagonist a story of Flavius Silva versus Eleazar Ben Yair. The former Roman procurator of Judea, and the latter a Jew. Both leaders, one was the commander of the Xth legion; and the other, a jew, the leader of Masada. Wedged in-between, the love of the General for a jewess...and much drama on the book, good read. What did I learn? well, the author depicts very well the weaknesses of the human nature. Don´t matter your rank or position in society, you may have fears, vices, moral faults. It´s life (ces´t la vie), and one more thing, sometimes is the ones of the same tribe, city or country, that may decide give a leader a hard time.

Executive Power, a thriller that involves the American President and his security staff, including Mitch Rapp, a former SEAL guy turned CIA advisor. Yet, Rapp can´t help himself, he ends up involved into action himself. The highlight here is the descriptive skills of Vince. I mean, the human drama, several human traits like how people get frustratred, get fed up with red tape, corruption (never on the part of the American characters, though, ha ha).
The author uses good comtemporary language, good to one that wants to build up vocabulary. Provided that the reader is capable of tolerating some description of violence, though. Be warned. Other thing I learned? the novel/thriller is a big brick of a novel, with its 517 pages! definitely not the faint!.

I am reading Jalna, the Witheoaks of Jalna -saga, Book 7, by Mazo de La Roche. She was born in Toronto, disliked life in urban cities, moved to a farm. No wonder the book is set in a little city, but with a good and simple narrative, I like it. What I learned here is that I like a simple life, sometimes I crave for it. As in real life, we need a break from time to time, this book is a literary break of sorts for me.
Votar 0

paults 07 Fev 2014, 23:32
The last book I ready was O Livro dos mediuns , writen by Allan Kardec , I learned how The spirit can comunication with us, diferenciation of god and bad spirits. It's very interasting because many mental disease can be explained by spirit process.
Votar 0

Serious now...
Something i have learned is to not worry too much about how the world goes, it can drives you crazy.
And this i've learned from the Hitchhiker's Guide to the Galaxy.
Votar 0