Comedy and Humour: How are they different between America and Britain? 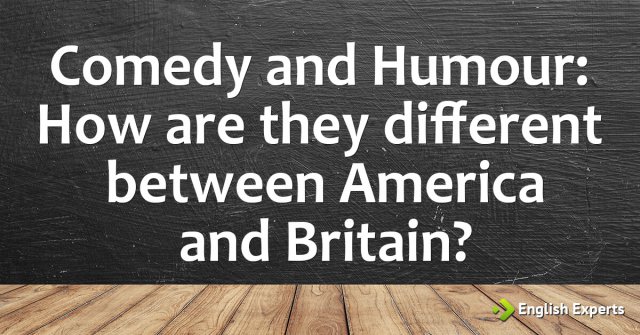 It is said that American and England are two nations separated by a common language. After living in both nations for a number of years I would tend to agree. One of these differences that you experience in every day life is humour.

One area that struck me right away when arriving in Britain was the sharp sense of ironic humour of many of the people that I met. It was a dry but highly witty humour even from people that appeared outwardly boring. I have since come to really enjoy British humour and comedy and frequently look at some of the old comedy programmes on the internet such as The Black Adder or Fawlty Towers and of course Mr Bean.

British humour is very ironic and a lot of it is directed at educated or informed people but it can also be very rude in an indirectly implied manner. It does require that you are aware of current events as well as a keen understanding of irony as a lot of it tends to be very subtle and you need to fill in the gaps to get the joke. In England you can easily be made fun of and not know it as so much of it depends on double meaning. It is said that Americans don’t get British humour, and in my experience most don’t.

In contrast American humour tends to be much more “in your face”, in the slapstick tradition, and thus a lot more physical at times such as the Eddie Murphy, Jim Carrey or Ben Stiller films. It is pie in the face sort of stuff, which is OK when you are young but lacks wit and interest as you get older. American TV comedy programmes assume that the audience is stupid and does not know when to laugh, the jokes are telegraphed at the audience you are given many clues that you must laugh at a certain time. Also since characters are always broadly caricatured so it is difficult to empathise with them.

A great way to see the difference between the two styles of comedy is in the programme “The Office” which is originally a British comedy which was remade in the USA a few years later. The British version was a world wide success.

The British version is very funny and very intelligently written. It is subtle and at times it take some time to get the joke and at others it is hard to watch as you cringe in expectation of what is going to happen. However, you can relate to some of the people in the programme as they appear to be more real, just like people you would know at work.

The American version was also very successful but it lacks the wit and sharpness of the British original, it is much more “in your face” and telegraphed. Furthermore, the characters in the programme appear unreal, certainly not like any of the people I met in America.

Look up both versions on the internet, watch them and then send us your comments to discuss.

I also like the British political satire, a good programme to watch is The Thick of It. It is brilliant, but you do need to be up to date with your knowledge of world and British politics and characters.

The same applies to stand up comedy. England is big on stand-up comedy, people really love it. Watch the ones below as these also give you an idea of a range of British accents.

Some others programmes to watch:

Look these up on the internet. It is a good way to learn English as well and if you ever go to Britain you will be prepared to deal with their sarcastic but witty sense of humour.

On printed media there are some very smart cartoons such as Dilbert or The Far Side – check them out on the internet.

In summary, there is a lot of great comedy on both sides and the styles reflect the culture of each country. Best of all, it is a fun way to practice your English – enjoy.