Working on a cruise ship: Around the World in 80 Years 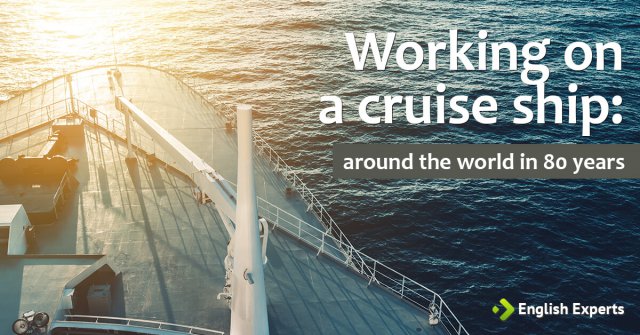 What if you could actually get PAID to travel the world? And I’m not talking about having a job abroad… I mean, what if somebody actually gave you money every day to go from place to place… MORE than you could spend, so you’d actually be saving up in the process? What if, on top of all that, you also had free food AND free accommodation everywhere you go?

Sounds too good to be true, doesn’t it?

I will never forget the day I ran into Janine… It was an autumn day on the stunning Spanish island Gran Canaria, just off the coast of Africa, and we were having dinner with some other travelers. Her story stood out from the others… Not only had she seen more countries than anybody else… she had also done it for free… and made money in the process!

Nope… the answer is both totally ethical and completely legal, and just about anyone can do it… in fact, it is not only one of the most promising ways to travel the world, but also one of the EASIEST ones.

“So what are you talking about Frank? Stop teasing already and tell me the secret!”

Well, I’ve actually already told you… it was buried in one of my previous articles, I just haven’t talked about it at great length yet. And the best way to understand what I mean is a quote by Zig Ziglar: “You will get all you want in life if you help enough other people get what they want”. I really believe in this quote. In other words… one of the best ways to travel the world is by helping other people to travel the world.

I’m talking about the cruise ship industry, of course! 19 million people escape from their daily routine on an ocean liner every year… and if you help them make their dreams come true, your own dreams will come true as an automatic byproduct.

The surprising fact is… it’s actually very easy to find a job on a cruise ship, because most people don’t want to work on the high seas for a life time. For most, this is seasonal work… they want to have an adventure for a couple of months, and then get back to the main land. That means that turnover in staff is high… so cruise companies are constantly looking for personnel.

But how can you get a hold of one of these dream jobs?

There are two ways, really. You could either get hired by the cruise line directly, or you could go through an agency… there are a ton of companies out there whose business is recruiting staff for the ocean liners. If you’re serious about this idea, I recommend you do both… I did.

I looked up all the cruise lines, AND all the cruise job agencies in online directory (Google is your friend, and so is Wikipedia). Next, I made a list of the biggest ones, because I didn’t want to be stuck cruising back and forth between two islands… I wanted to travel wide and far!

And third, I eliminated all cruise lines that went to cold countries. I know some people dream of a cruise to Alaska or the Antarctica, so that’s just my personal preference. There are stunning landscapes to be explored even in the Scandinavian fjords, whereas I have acquired more of a taste for the tropics… But that’s all up to you.

All of those jobs are great options… they all pay pretty well and leave you plenty of free time to explore every harbor your ship anchors for the night. Jobs like chamber maid, waiter, cook and engineer are a different matter, however… they tend to be extremely tough, with 13 hours of work per day, for 30 days a month.

The next thing to consider is what flag you’d like to sail under. The good news is that all ships sail, by definition, out on the open seas, and that means you won’t need any special work visa… Neptune is a lot more forgiving than the American TSA! It also means that in many cases, your income will be tax-free… check with your attorney for details.

Finally, rumor has it that American cruise lines often offer better hours and higher compensations than Brazilian ones… so that’s something to keep in mind as well. The two largest cruise lines in the world are Princess Cruises and Royal Caribbean (I worked for the former for a while)… those two companies always one-up each other, as each year one of them will build “the biggest cruise ship in the world”, just to watch the other one build an even bigger one the year after.

Don’t expect to get hired over night… and don’t just apply to one cruise line. In my case, I wanted to work as a pianist on board, so I recorded a demo and sent it to about fifty different agencies and companies. Within a few weeks, I received the first couple of offers, and within a couple of months, I received the first offer I could not refuse.

I ended up taking a plane to San Francisco, where I was to board the Sun Princess as atrium pianist and see ALL the great islands of the Pacific Ocean. The ship took me to Hawaii, Bora Bora, Tahiti, French Polynesia, the Cook Islands, Fiji, Samoa, New Zealand, Australia and many other (expensive, may I add) tropical paradise islands… for free!

Where would you have gone? Leave me a comment and tell me which cruise ship you would board and what your destination would be!

I sometimes say how traveling is not all beauty and grace, and there are hard times, for sure… There are visa hassles and insurance providers that don’t pay up, and just in general life on the road isn’t ALWAYS a dream. Well, when it comes to life on a cruise ship, it really seems like nothing but a dream come true.

Make it happen… I look forward to your comments!