Sail Boat: Around the World in 80 Years 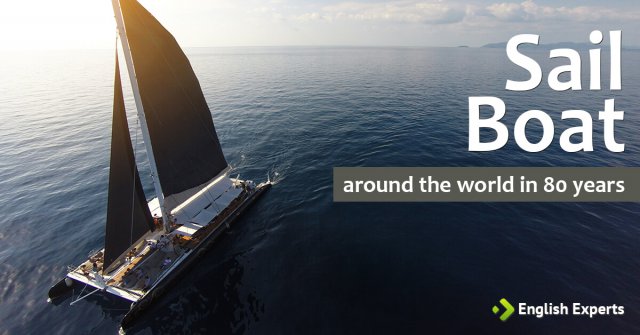 Hey guys… last week, I told you about a friend of mine who has been sailing around the world on his own little schooner for many, many years already… and I mentioned that I had a chance to join him on his voyage for a while and that we traveled a leg of the trip together. And that is really one of the amazing things that start happening once you just get out there and start interacting with the world and meeting people… you just never know what kinds of situations you’ll end up getting into.

I actually met this guy in Porto Seguro, one of the places that claim to be the spot where the Portuguese first set foot on the South American main land in the year 1500… and we got into a conversation as we were both riding the “busão” from our hotel to the beach. He was sitting next to me, reading a book in a language I had never seen before… and since I speak eight languages myself and the topic absolutely fascinates me, I asked him about it.

As it turned out, the book was in Norwegian, and he had basically retired and started to travel the world at the age of 28. How is that possible? Well, he wasn’t rich, of course… only very few people manage to amass millions in their twenties. But, he had gotten himself a good education (the KEY to anything you want in life!), and worked as a lawyer long enough to buy a small, used sailboat. These things can actually be cheaper than second-hand cars, and now he didn’t have to pay rent anymore because he was sleeping on the boat… and so his cost of living was almost zero, and he was free to travel.

We went to one of the famous parties of Porto Seguro that night… and if you’ve ever been there, you know that it’s one of the most amazing places to celebrate… live music and “caipirosca” at the beach under a Bahian star sky… what could be better? But while we were still having drinks and talking to some people we had met that night, he suddenly started to look out onto the sea with a contemplative look and then declared: “If the wind doesn’t change by morning, I will sail tomorrow.”

Can you guess what my response was? That’s right… the first thing I said to him was: “That sounds great man… do you need any crew?” And so we set sail together the very next morning and headed South towards Vitória, the capital of Espírito Santo… and it was one of the most amazing parts of my 11½ years on the road.

One of the things my new friend Andrew would do was to tie a rope to his ankle and jump overboard in the middle of the ocean to go for a swim. I thought that was one of the craziest things I had ever seen… we were nowhere near land, and the sea must have been thousands of feet deep below him… and only God knows what kinds of sea creatures he was sharing the waters with.

And then one day, it happened… I was lying on deck, looking at the sky and sunbathing, when I heard a loud coughing sound outside the boat. Oh my God… was Andrew drowning out there in the ocean? I was really worried about him and immediately stood up to see if I could help him… but what’s more, I had no idea how to bring the ship back to land without him!

And so I stood up and looked over the railing, and what I saw surprised me even more than anything I could have expected… there was a giant hunchback whale who had come up for some fresh air RIGHT next to the boat. The sound I had heard was his blowhole, and he had been attracted by the sound of the engines of the boat… and the whale was close enough to me to where I could have touched it.

I called Andrew immediately, and for the rest of the day, we saw entire whale families as they were following us on our journey and jumping out of the water to get a better look at us. As opposed to dolphins, however, whales don’t just skip a foot above the water… they jump several meters high, and in fact Andrew warned me that this could be very dangerous. When a whale jumps, he can’t really see what’s happening above the water, and so there is a risk of him landing on (and sinking) the ship!

Fortunately, none of that happened and we arrived safely in Vitória a couple of days later. I was still only in my second year of traveling the world at the time, but I remember thinking that day… wow. This is what life is all about. This is what I want my entire life to be like… to go from one paradise to another, make new friends everywhere, and experience life to the fullest.

But the real takeaway from today’s article is this: You just never know whom you are going to meet when you’re on the road, or what kind of amazing adventures you can get yourself into if you stay open and strike up conversations with other travelers… so if you ever get a chance to go abroad, put your extrovert cap on and you will make more friends in a month than you would at home in a year.

That wraps it up for today, and since we’re already on the topic of boats, I will answer one of the questions I get most frequently next week… how to find work on a cruise ship, and what is life on board REALLY like?

Stay tuned to find out, and leave me a comment below… what was the most exciting trip you’ve ever been on?

I will talk to you soon… my best to you all,