What to do if you run out of money: Around the World in 80 Years 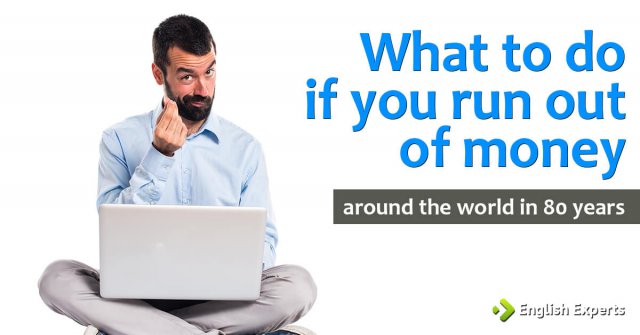 Hey guys… After a long hiatus, I am finally back to this travel series! The past couple of months have been some of the busiest of my entire life… I started teaching a new course that required my full attention for about 15 hours a day, all while moving back and forth between six different countries… So my apologies for being out of touch!

I’m still on the road though, and I haven’t forgotten about you guys.

Last night I had a conversation with a fellow traveler out here in Asia… and one thing that struck me about our talk was the word “real world”. He was often talking about going back to his home town London, which he referred to as more real than Asia. And I thought it’s interesting how we often feel like the place where we happen to be born, by pure random chance, is somehow more “real” than other places.

But what’s more, he was actually worried about going back home… he has been on the road for almost five years, and he was concerned about being forced to go back in case his income dries up. He likes Asia better than England, and he likes traveling better than being “stuck” in one place… so that’s a real concern of his.

Which brings up a question I get asked frequently… What can you do when you run out of money while you’re “out there”?


This has happened to me more than once, especially early on during my travels… And I’ve long since figured out how to deal with it. You see… One thing I’ve always believed is that success leaves clues. If you want to be successful at something – languages, travel, a sport, a career or anything else at all – the best way to get there is to get instructions from someone who has already pulled it off… someone who has already been successful.

And back when I was a kid, I made it a habit to approach people who had traveled a lot… And I asked them about their life style. I asked them to tell me stories of their adventures, but also about challenges they faced and how they overcame them. And one of the stories I heard back in the day had such a profound impact on me that I will never forget it… Even though it has been so many years since I first heard it.

I was working at a factory at the time, saving up for my first big trip, and one of my fellow workers had spent many years traveling through all kinds of countries. And here’s what he told me: “Just take risks and don’t pass up on the things you really want to do… because life will always go on.” I asked him what he meant, and he elaborated in the form of a story… and told me about one of the greatest challenges he ever faced on the road.

He was in Norway at the time… it was winter, and he had run out of money. All he had left were 3 Euros… not enough for a meal, and definitely not enough to rent a room. But what’s more… It was so cold that he wasn’t able to keep his hands out of his pockets to even carry his bag… the cold was too painful. So he was walking along the streets of Oslo, tense, cold, broke and hungry, kicking his bag in front of him as it started to get dark and the shops around him began to close for the night.

And this is where he learnt that life will always go on… no matter what. He went into a flower shop to warm himself up for a couple of minutes, and got into a conversation with the lady who ran the shop. She invited him to join her for dinner, and as it turned out, she needed some help. The next day, he started working for her for a couple of weeks, saved up some money and continued his travels.

I have been in similar situations, and his story was always an inspiration for me. And the fear of challenges like this one is one of the reasons why many people don’t follow through on their dream of traveling the world.

But what can you do if you get stuck somewhere without any money?

The most obvious answer is to teach English. It’s pretty amazing, really, but in almost every country in the world, you can find work as a language teacher… There are only very few exceptions, such as Singapore or the Philippines, where English is (one of) the official language(s). And the second most obvious answer is working as a waiter. Those two jobs are like magic buttons that you can push almost anywhere in the world and make at least enough money to survive until you can figure something else out.

But there is a third way to keep traveling once the money runs out… And I learned about it the same way I heard the story about that cold winter in Norway. During one of my first months on the road, I ran into a guy who had been traveling the world for many years already… and so of course I asked him how he was able to fund this life style.

The answer: Work in tourism!

Most cities that attract tourists are seasonal… which means there is a lot of work to be done during certain months of the year, but no work at all outside the season. You can work as a ski instructor, diving teacher, or even as an animator in a beach hotel for 6-8 months per year and really save up… and then you get several months off, so you can use that money to travel at your leisure for the rest of the year.

It’s going to be a bit of a rough ride, especially if you want to work a lot of overtime to really save up… But you’re working in paradise… and you get paid to be in a place that other people can only dream about visiting for a week or two per year.

Which brings me back to my friend who was worried about going back to the real world… leaving South East Asia and heading back to the cold and the rain of London for mind-numbing work in an urban, materialistic society. And this is what I told him… go to Vietnam to teach English… or simply head back to Europe to work in tourism for a while. One place is no more or less real than the other… and fortunately, we live in a free society where we can choose our place in this world.

I can’t believe how long this article has gotten again, there are a couple more great tips I wanted to share here but I want to keep this below novel-length for today… so I’ll have to leave the rest for the next edition of “Around the World in 80 Years.”

Guys, it’s good to be back, and I look forward to exchanging some ideas with you again in the comments, and in the forum… And please do leave me a comment below and let me know what else you would like to read about.

Greetings from Asia and my best to you all,