Royalty and Millionaires in Bali: Around the World in 80 Years 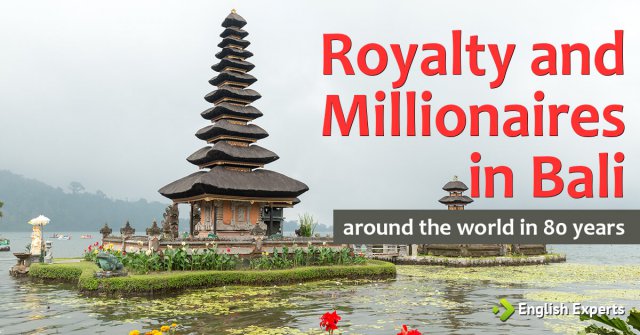 “If the wind doesn’t change, I will sail tomorrow.” He held one finger up in the air and assessed the wind’s speed and direction… he had been sailing around the world for five years non-stop, and I was about to join him on his trip. And that… was going to be one of the most amazing parts of my journey.

You may remember that in the last article, I promised to tell you more about some of the most interesting people I have met on the road… and today I’ll make good on that promise. You see… when you keep going from place to place, meeting new people *every day* is almost *inevitable*. And if you keep doing that in exotic locales and cultures, well… some of these people are bound to be flamboyant characters with absolutely fascinating lives.

These encounters have taught me a lot… and while there have been too many to count over the years, I’m going to tell you about some of them today. But first, I will let you in on a little secret about me… I’m not only a linguist and a language teacher, I’m also a professional pianist and a music teacher. And so it happened one day, as I was in Spain, that I got a phone call from an Asian pianist who is a very good friend of mine:

“Frank… I know this is coming totally out of left field… But how would you like to teach the piano in Bali?” I was in Barcelona when I received that call… I had been in Spain for about half a year, I had just gotten out of a relationship and I was ready for a change of scenery… Asia sounded *perfect*. But more than Asia… Bali? One of the most famous islands for paradise beaches and tropical getaway vacations in the world… I couldn’t believe it when he told me.

What would you do? If someone offered you a job in Bali… would you take it? Well, for me, that decision was a no-brainer… and I instantly said yes. I didn’t even ask him anything… I didn’t ask where I was going to live, how much money I was going to make or when the project was going to start… I just said: “Absolutely man. Count me in!” He was a good friend I could rely on… and I knew I was not going to regret that decision.

You see, Indonesia is one of those places that are so exotic that they might as well be on a different planet. I mentioned Sumatra in my last article…one of the world’s best spots for diving. Then there is Java, the main island of the Indonesian Archipelago, with huge ancient temples that most people don’t even know about… and then there is Bali, of course, the Hindu part of the country and one of the world’s most famous places to go surfing!

But two of the most interesting things about Indonesia that most people don’t even know about the country are these: it is the world’s biggest Muslim nation, and it still has royal families… and one of the princesses ended up coming out to dinner with me and a couple of friends of mine one evening. It still blows my mind to this day… royalty in the 21st century! I remember wondering that night who was more influential in the country… the princess to my left, or the multi-millionaire business tycoon to my right?

And this encounter taught me an important lesson, because as I was living among some of the richest people in the world, I realized something interesting… in the end of the day, they were both just normal, everyday people like you and me… people who eat rice and meat, who fall asleep every night and wake up tired before their first coffee in the morning. People who have their dreams and hopes and fears and aspirations in life, just like everybody else.

And that’s the thing – when you do get to experience the life of the mega-rich for a while, you really begin to understand a fascinating part of human nature: we are truly adaptive creatures. Studies have shown that people who have an accident and end up in a wheelchair might fall into a depression… but six months later, they are back to the same level of happiness they had before their misfortune. By the same token, people who win the lottery are usually ecstatic for the first couple of months… but once the initial novelty wears off, they, too, go back to their “baseline” of happiness.

That seems to be very difficult to believe… but trust me, it is very true. I never asked my friend who invited me to Indonesia where I was going to live… but he had a real treat in store for me. I ended up living in the huge mansion of the millionaire I mentioned above… there was the main house we lived in and two separate houses with additional rooms… plus a fourth house where his seven servants lived, his driver, his gardener, his maids and all the other staff.

And you know what… for the first couple of weeks, I was totally blown away. I had never experienced this kind of luxury in my life… and it was amazing. But soon enough, the exact same “happiness effect” I described earlier started to get a hold of me… and I got back into a routine. I went to work every day, did my workouts, had my meals and met my friends… and before I knew it, I didn’t even really notice the luxury all around me anymore.

And here is what I found… money is nice to have, and life is extremely complicated when you don’t have enough. But my time in Bali wasn’t special because of the nice house I lived in, or because of my host’s lavish life style… what made it special were the people I met there, and the friendships I forged. What made it special was being in an exotic paradise that I could never even have dreamed of visiting just a couple of months earlier… and the moments I shared with my friends in that place.

And now I just realized that I’m completely out of space again, and I haven’t even told you the story about the sailor who invited me to join him on his trip around the world for a while… so I guess I’ll have to leave that for the next Part of “Around the World in 80 Years”. But as always, leave me a comment below and let me know what you’d like to read about… I really do read all the replies and try to get back to you personally as soon as I can.

Thanks for reading, and stay in touch…

My best to you all,