How to make money while traveling the world: Around the World in 80 Years 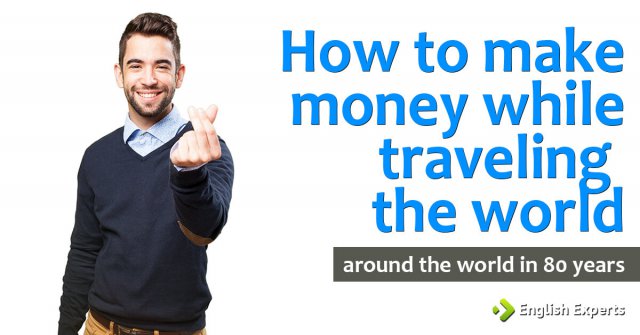 Hey guys! I am back… and today I’m writing to you from the wonderful city of Chiang Mai, in the North of Thailand. It’s a very peaceful and serene place, surrounded by mountains and wonderful landscapes, but with a pleasant climate year-round – the perfect place for a writer… and, of course, for a linguist who likes to write. But before I tell you more about life on the road, I’d like to say THANK YOU for all the wonderful comments that you posted on the blog last week! I read them all and will do my best to reply to as many as possible.

In Part I of this series, I promised you to let you in on my secret – how is it possible to travel the world for years on end without being rich? That’s a good question… and it’s something I was very intimidated by as well when I first started out.

My parents have always had to work hard to make a living, and I didn’t have a lot of savings when I first hit the road. But I was determined, because I believe that if you have a good attitude, and you really want to achieve something – you can make it happen… no matter what it is. In the words of the great poet Goethe: “The moment one definitely commits oneself, then Providence moves too. Whatever you can do, or dream you can do, begin it. Boldness has genius, power, and magic in it. Begin it now.” Or in more simple terms… where there is a will, there is a way! And I was committed… I was willing to do *whatever* it takes to find that way, and to make my dreams a reality.

Sure, I was scared… scared to leave my life behind, scared of not seeing my friends and family for a year, and scared of running out of money in a foreign country. But the thing I was probably most scared of was having to give up and go back home. Heck… I didn’t even know where I was going to get my laundry done abroad! But my desire for adventure was stronger than my fear… and there was literally nothing I wanted more than to be free… and to see the world! Alright, I’m sure by now you’re on the edge of your seat with anticipation, asking yourself – so what IS the secret, Frank? How did you make it happen… how can I travel the world without a lot of money?

Well, there are really a million little secrets… and I will share them all with you in this series – no holds barred!

But the three most important ones are probably:

I will talk about all of these in the next couple of articles in more detail, and I’ll let you in on a couple of secrets that even most experienced travelers don’t know. But for now, let me give you an example.

I have met many Brazilians on my travels who found a way to work in wealthy countries, where they earn a relative fortune… even working simple jobs, for example in the hotel industry or in carpentry. Because hey – if you get paid in Dollars, Pounds, Euros or Yen, the money will go FAR elsewhere later! And what most people don’t know: Even the Brazilian Real is MUCH stronger than most currencies in Asia, Africa and South America, for example. The real trick, however, is to be FRUGAL in the wealthy countries… because they tend to be expensive, too!

Once you’ve saved up a fair chunk of change, take your bag of money to a country where it’s worth five TIMES as much as where you made it. In Thailand, for example, you can rent a perfectly decent hotel room for less than $5 per night, and have delicious Thai food for $1 per meal. There are dozens of countries like that, and it’s even cheaper if you’re traveling on the Euro or the Pound! If you do this right, you can work for 6 months per year and travel the rest of the time… I’ve even met people who only work 4 months per year and travel for 8… and in some cases even less! And hey, even while you’re working… you’re still in a foreign country, experiencing an exotic culture, making new friends and having an exciting adventure…

I’ll have to wrap it up here for today, but I’ll be back next week – and in the next article I will show you some SPECIFIC ways to make this happen. I will tell you exactly what jobs will PAY you to travel… even if you only have a Brazilian passport… and how to get paid in dollars… and, of course, I will tell you where to find these jobs.

If you have any questions, feel free to join the discussion on the forum, or to leave me a comment below.

I’ll talk to you again soon.