The Best Time to Travel: Around the World in 80 Years 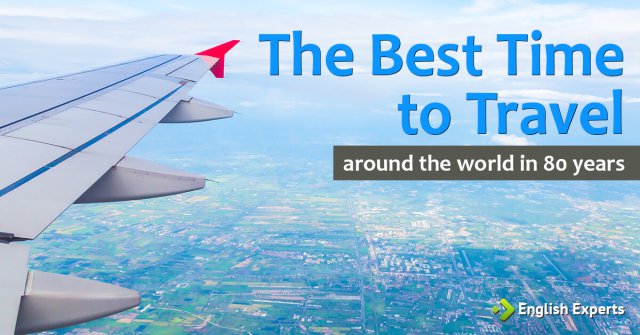 Hey guys! I just got off the phone with an old friend that I haven’t seen in several years… and we had a really fascinating conversation that I wanted to share with you today. We talked about traveling the world, and about the big question – when is the best time to go?

You see… back when we were both still in school, our friends all had very different ambitions and dreams. Some wanted to stay at home and have a good career, so they could make a lot of money and their biggest goal was to start a family, buy a big house and drive a Mercedes.

Others, like me, were never really all that interested in mansions and fast cars. Sure, it is important to always have enough of it, but we believed that life was made up of time, and not of things… and that no amount of material wealth could ever replace a rich life, full of interesting experiences… if given a choice between a car and a round-the-world plane ticket, we would choose the latter without blinking an eye.

Well, so far, so good and I think both of these choices are absolutely valid. Being a “digital nomad” isn’t for everybody, and some people don’t really feel the desire to see the world and that’s fine. I think the most important thing in life isn’t to travel, it is to follow your heart. And if your heart tells you to stay at home and raise a family, that’s what you should do. And if your heart demands you roam the planet having adventures, then you should do that too.

This third group is the one I want to talk about today, because this group often falls into a very common trap: the “someday, maybe” predicament. And if you have ever procrastinated on anything, if you’ve ever put something off for later, you know what I’m talking about and who hasn’t? We all do it sometimes.

The problem with putting off our plans to travel, however, is that there will always be a very compelling reason not to go NOW.

So the big question remains… when IS the best time to travel the world, Frank?

The answer is, there will never be a time when everything is just perfect, and all the conditions are just right. Leaving your entire life behind will always involve sacrifices of some sort.

Believe me, I know how hard that can be because my own situation was no different. When I first left my home country with nothing but some clothes in my backpack and burning wanderlust on my mind, I had to leave my entire life behind!

I had just finished renovating the apartment I was living in; I was playing in a rock band that was just becoming more and more successful; I had a girl-friend who had to finish her degree before she could travel, and of course I had friends and family back home that I wouldn’t see for at least a year!

Honestly, it really wasn’t a “good time” to go. I had a good life back home, and leaving would surely mean giving up a lot of good things that I had been blessed with.

But here is the good news, guys: Once you’re on the road, life will more than make up for anything you had to sacrifice. Sure, you have to say good-bye to your best friends, but you will make more new friends on the road than you could ever imagine right now. You will make experiences that you would not trade in for a million dollars and you will go places and see things that you will remember fondly until the day you die.

One night, about two years after I first started traveling, I was sitting on a beach in Spain, on the marvelous island Formentera in the Mediterranean Sea. With the sand dunes behind us and the vast waters ahead, I saw two falling stars that night and I didn’t even make a wish. I only remember thinking that I was as happy as I had never been in my life and if I was to make a wish, it would have been for more adventures like the one I was living right that moment.

I know I promised you guys to tell you more about how to make money on the road, and to give you some specific tips about jobs that pay you to travel and I will share these tips with you in my next article.

So in answer to the question – when is the best time to travel the world? I will have to say the answer is “never” and therefore, the answer is “NOW.”

I will be back next week with the promised post about jobs that pay you to travel, but in the meantime, feel free to join the discussion on the forum or leave me a comment below, I read and reply to all of them.

I look forward to hearing from you, and always the best.