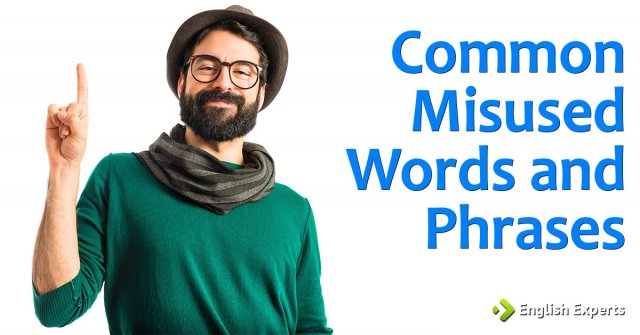 When I am reading; posts in the forums of EE, local American newspapers, and even some magazines I often see words and phrases misused. This non standard usage is very distracting and sometimes confusing to the reader, therefore all of us must be aware of this pitfall and earnestly attempt to avoid these common mistakes. Please remember that just because you have seen something in print does not necessarily make that usage correct. Further one must be vigilant to avoid writing some non standard words which may sound the same in the spoken language as the correct written words. An Example of this type of mistake is QUOTED from a local United States Newspaper, with the incorrect words in caps and correct words in parentheses; “ The bank robbery suspects left THERE (their) checkbook on the teller’s counter, which proved THERE (their) COMPLIANCE (complicity) in the ELICIT (illicit) actions.” I personally think the robbers were almost as stupid as the paper’s reporter and editors.

The following list, with explanations and examples, will help you in determining which words to use if you want to be correct in your writing and speaking, and you will be using a more correct form of English than many “Professional” writers. An added benefit of learning the differences in these words will be a marked increase in your vocabulary.

Homonyms – Words that sound the same

Accept – Except: Accept means to receive and Except means excluding or to exclude.

Affect – Effect: Affect means to influence while Effect means result or to bring about.

Allusion – Illusion: Allusion is an indirect reference and Illusion is a misconception or misunderstanding.

Bare – Bear: Bear has many meanings including the animal, but bare has only one meaning and that is without clothing or covering. Never write “Bare with me”, as you are inviting someone to get naked with you.

Capital – Capitol: Capital refers to a city or wealth while Capitol refers to a building where lawmakers meet.

Elicit – Illicit:  Elicit means to bring about or to evoke. Illicit means unlawful.

Emigrate from – Immigrate to: Emigrate means to leave (Exit) a country or region and Immigrate (Into) means to enter another country with the intention to reside there.

Principal – Principle: Principle means a basic truth, law or belief, while Principal is a person or a sum of money.

Than – Then: Than is a conjunction used in comparisons, and Then is an adverb denoting time. (Then tells when)

There – Their – They’re: There specifies a place, or is an expletive, There is a possessive pronoun and They’re is a contraction of they are, and normally is not used in informal English.

Your – You’re: Your is a possessive pronoun and You’re is a contraction of you are.
YOU’RE going to get hurt if you don’t move YOUR foot inside the golf cart.

Other Problem Phrases and Words

Supposed to – Suppose to is incorrect keep the “d”
Used to – Use to is incorrect again keep the “d”
Toward – Not Towards there is no “s”
Anyway – Never Anyways again there is no “s”
Couldn’t care less – To say I could care less is wrong when you mean you do not care at all.
Chest of drawers – Never chester drawers, Chester is a man’s name.
Going to – Never use Gonna, it is a non standard word.
Want to – Never use Wanna, it is again a non standard word.

For more misused words and some good laughs see: Commonly Misused Words in the English Language.