Have you ever felt an earthquake? 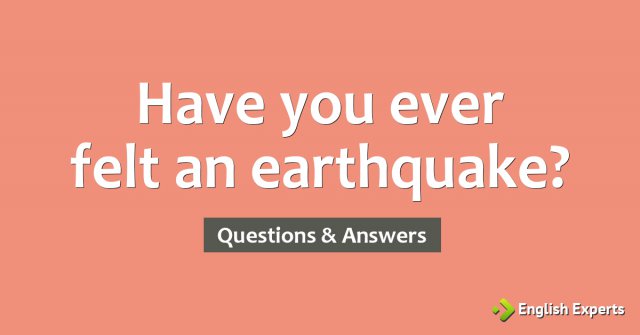 - Yes, once I was in Japan and I felt a shallow earthquake. Fortunatelly nobody got hurt.
- No, but I always get very impressed when I watch catastrophes such as the one that ocurred in Haiti in 2010.

What would a 20.0 magnitude earthquake ensue, had we ever had the opportunity to live through one?
Votar 0

Frank Florida 210 •5 Expert Member - 22 Mai 2012, 17:46
I used to live in Japan for a couple of months in 2008 and I probably experienced half a dozen earth quakes during that time... it's extremely common there. Most of them were pretty small, but we had a big one as well and a nuclear power plant up north got hit... we were constantly listening to the radio, hoping there wouldn't be a meltdown. I left Japan soon thereafter... building nuclear power plants on tectonic fault lines just didn't sound like a very good idea to me at all...

But the experience certainly taught me to live every day as if it was my last!
Votar 0

Marcio_Farias escreveu:I did feel a minor temblor back in '67 or '68 on my deceased uncle's farm in Caruaru - PE. I felt the land shake and rumble a bit for a few seconds. I remember dropping a lit cigarette alongside the feed trough I rested on.

What would a 20.0 magnitude earthquake ensue, had we ever had the opportunity to live through one?

Here is a list of highest earthquakes in history:

Rurouniken 13 Set 2013, 15:08
Hello Everyone!
I haven't.. But i'm sure that is very powerful and dangerous, by the way my aunt have been lived almost 14 years in Japan and she told me that she ever felt a Earthquake and she was in her house when began it and she also told me that is terrible because you fell the floor and the stuffs shaking and falling on the floor.. Should be really powerful this.
Votar 0

Fernanda Shimizu 10 18 Out 2013, 22:25
Yes, I live in Japan, so you'll understand that feeling an earthquake is part of my daily routine.
I am so used to it, that when things start shaking, I just stand still where I am, wondering if I should run. I often joke that probably I will die while wondering whether I should run or not...
Votar 1

PPAULO 54135 •6 •43 •973 Top Posters - 19 Out 2013, 00:32
I was watching TV in my parent´s, since I was Insomniac that night.
Don´t remember if it was Novemver or December, 1986 (more likely to be December).
It was on rural Rio Grande do Norte state, it was a place in-between Vera Cruz and Bom Jesus. The only sound was of the TV set, that I had turned the volume down not to wake up them, it was like a softly whisper almost. The sounds of crickets could be heard.
On about 5 o´clock, or whereabouts, I heard this noise as a if a train would come in our direction (only that there was no train to be seen for hundreds of kilometers away). The cups in the cupboard clinking and rattling, the thermos on the table dancing madly. The hens cackled in despair, I wasn´t out but I know they looked one another, in puzzlement.
Dogs barked, people wake up and didn´t know what had happened, and not what was happening, since the duration of the tremor was of some minutes.
The other day it was the subject of the day, everybody talked about it, the buzzword.
Radio and mainstream media assessed the damages, Joao Camara city (about 130 km/81 miles far from us) had been the epicenter and was pretty damaged, some houses went down, others pretty damaged.
In the end, there it caused one death, plenty of homeless and many people abandoned that city and never went back, afraid of a repeat.
Indeed some minor tremors came after that, none like that.
It was quite scary, altough I had no reaction, I didn´t had experienced such things before. But the noise and the ground vibration was the scary part.
And that, of such distance of the epicenter, I can imagine how it was there!

Don´t know for sure, but it seems that today, after all that, the houses are more safely built. Maybe not with advanced technology like the one of Japan, etc, but I think these houses are stronger today that they were. Not that cream-cracker walls that they were made.


The UPI agency published the news, it deserved mere 70 words or so!


Must have others, but are minor mistakes, this was a gross one! so, buddies, forgive me this time. It was because of lack of sleep.

kungfuadam 130 •5 Expert Member - 25 Out 2013, 00:58
When I was a child growing up in southern California, I felt numerous earthquakes. Now I was in the Los Angeles area when I "felt" the giant Northridge quake. If I remember, that was over 7.0 on the Richter scale. That was enough to throw dishes out of the cupboards and cause a big mess inside. However, the house escaped with no damage.
Votar 0