Have you ever gotten lost? 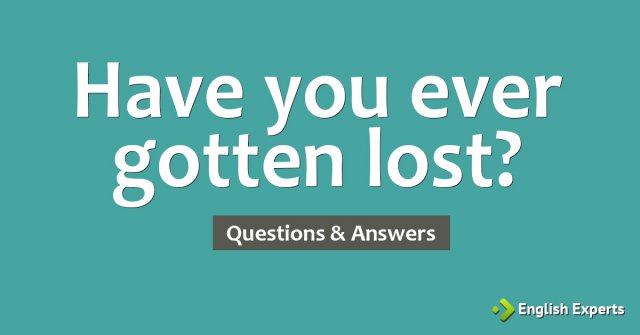 - Once I was driving in SP downtown and I could see the building which I was supposed to go, but I just couldn't find the way to reach the building! All the streets were one-way, and the one-way was always opposite to the way I wanted to go

- Once I was travelling to Taubaté and felt asleep while my friend was driving the car. When I woke up I just said: I have nothing against Belo Horizonte, but why are we in Fernão Dias road?

Ps1: My best friend is named Maps.google
Ps2: I need a GPS

(by the way, it stands for Global Positioning System, in case you didn't know)

- When you go to places such as parks, airports and shopping malls, it is important to establish a meeting point in case you or your friends get lost.

- A couple os months ago my cousin lost her son in the supermarket. After asking for help she found him, very angry: "Mom! Why don't you hold my hand!". By the way, his hands were already full of candies...

BrunoCosta Top Posters - 12 Ago 2010, 15:52
I remember get lost from my fathers several times (when i was a little boy):in the supermarket,on the mall,on somewhere else...

I don't need a car to get lost.I remember i was in Salvador and of course there was a few moths i haven't visitted the city (wich by the way is my hometown) and i was in a friend's apartment and i used to go out to watch a movie in the theater while i was there and just by foot i i'd take my way to the mall (Salvador shopping) and just asking people in the way and they saying that it isn't too far way,but it ended up being too far way yes,because i waked so much that when i arrived there i just wanted sit down.
But that wasn't the problem,The problem was that when i was coming back it was already night and the only refference i had was the design of the sourrounding buildings.I don't need to say that i take a very long time to finnally get there.I should have taken with me a water bottle(and a map

Marcio_Farias 12560 •1 •23 •212 Expert Member - 12 Ago 2010, 17:31
You wouldn't have lost your bearings if you had carried Salvador telephone directory with you. In it, you'll find Salvador city's detailed street map. Nor would Flavia if she had a detailed SP city street map at hand. If memory serves me, you'll easily find and acquire a SP city guide containing all or most of the streets you want to go to at the majority of newsstands and minor/major bookstores.

Street-searching Cariocas will also easily find and acquire a RJ city guide containing all or most of RJ's streets you can reach. Street-searching Recifians like me will not find and acquire a specific, detailed paper street map of Recife city that easily. Let alone a detailed street manual. Most Recifians will fall back on Recife telephone directory for directions to a specific street. Otherwise, they will google the street they want to reach. And this this half-Mineiro half-Recifian has done over and over.

More often than not, planning one's journey into, or GPS'ing your way around, town will save you a lot of trouble. If at all possible, a few phone calls for directions will help. If all else fails, get lost!

ailime 80 •1 Top Posters - 14 Ago 2010, 09:16
Yes, I have a lot of times. I usualy get lost when I am driving my car, even when I am being guided by my GPS. The last time that it happened I got extremely frightened because the GPS took me into a place similar to a favela,to an extremely narrow street that I couldn't even pass through it. There were cars parked on the both sides of the sidewalks and I couldn't turn around the car, so i had to back my car slowly, in the dark, being careful to not hit any car or anybody. At that moment, I thought I would be robbed or kidnapped, still scared stif, amid curious people staring at me...
Fortunately, I could survive.

ENG_rafael 10 Top Posters - 16 Ago 2010, 23:08
My friends and I are studying much far from our houses, so we have to eat out.
Someday ago, when I was going back of having lunch with a friend of mine, both of us decided to go back to school through an unknown path. Well, I don't need say after our decision we were lost, walking around a lots of streets without knowing where we were.
So, when we saw that was impossible to us maintain the fixed idea of other path towards to our school, we decided to go back the restaurant and then we took the known path.
Well, we spent a lot of minutes going around without a direction. But it was good for me, since after this day I am trying to learn different ways to go towards to a same place.
Votar 0

I usually get lost a lot around Vila Olímpia, where the streets make no sense and the traffic was changed by CET but the changes were not followed by Google Maps - however, I cannot complain about Maps, cause that app has saved me sooo many times, that I can only be grateful for their *free* existance!
Votar 0
MENSAGEM PATROCINADA Quer aprender inglês sozinho, mas não sabe como? Faça o download do guia Como Aprender Inglês Sozinho da English Live. Nele você encontrará dicas de aprendizagem por meio da leitura e também como tirar proveito de séries e filmes para expandir seu inglês.

I usually get lost a lot around Vila Olímpia, where the streets make no sense and the traffic was changed by CET but the changes were not followed by Google Maps - however, I cannot complain about Maps, cause that app has saved me sooo many times, that I can only be grateful for their *free* existance!

Yes, I do agree with you Van-Spirandeo. Google Maps is indeed a very useful and indispensable online tool for us. I have been always resorting to it.

I had a terrible virus on my computer and had to reformat the HD and reload all my programs. I have been checking it for about a week and I think I have everything in proper order and no virus to pass on, so here goes nothing.

Ailime, your last sentence might be slightly improved by changing it to read "I have always resorted to it." or "I have always used it to assist in my navigation efforts." Humm, now why did I suggest those changes?

Now I am really lost.

One astronomer has estimated that at the present time we can only observe less that 1 billionth of the actual universe, so if he is right,

OH forget it THIS IS GIVING ME A HEADACHE and YOU CAN FIGURE IT OUT.

Fortunately you are back!!
I thought you had given up on us.
Wellcome back!! We missed you!

Regarding your correction, I got it but I do not know how to explain it.
And about your headache do not worry about it, cause, in addition to that I got totally dizzy....
Votar 0

I tried to count the stars myself but since I only have ten fingers, I got lost really quick.

And yes the number of stars and then planets are represented by a truly astronomical number. (Pun intended)

By the way, who knows the meaning of the idiom "Here goes nothing"?

But I never want this happens to me, especially if it would occur on an extreme condition.
Votar 0