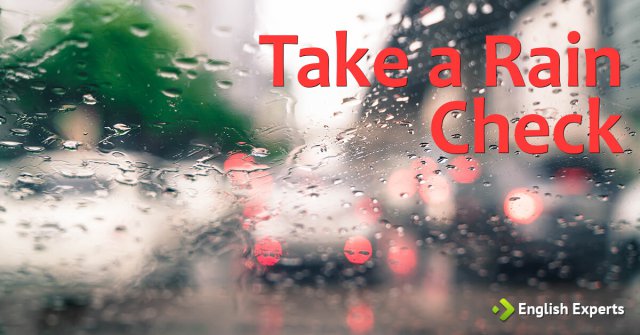 Hi guys! Today, we’ll be talking about the movie “Fun with Dick and Jane”. This is a 2005 comedy film starring Jim Carrey, and remake of the 1977 film of the same name. By the way, great movie for the whole family!

When Dick finds himself unemployed, he starts a competition with his ex-workmate to be the first to arrive at a job interview. But, when both arrive, they found a very large line of people waiting to be interviewed. Disappointed, they decide to go for a cup of coffee. But right when they’re about to leave, someone recognizes Dick and tells him he doesn’t need to wait in line. With an I-won look, Dick turns to his friend and says “Rain check?”.

A rain check is a ticket given for later use when a sports event or other outdoor event is interrupted or postponed by rain. It’s also a coupon (or some kind of agreement) issued to a customer by a store, guaranteeing that a sale item that is out of stock may be purchased by that customer at a later date at the same reduced price. The expression has migrated from its original context and it is most often used casually, either when declining politely an invitation with the implication that one may accept it at a later date or to suggest continuing at a later time an activity which has been interrupted.

Another example: On the forth episode of the fifth season (The One Where Phoebe Hates PBS), Ross forgets he had told Rachel they were going to go to the movies because he is sad and upset trying to fix his marriage with Emily. When Rachel arrives, he says that he’s going to have to “take a rain check“.

I hope you learned something. Have a great day!