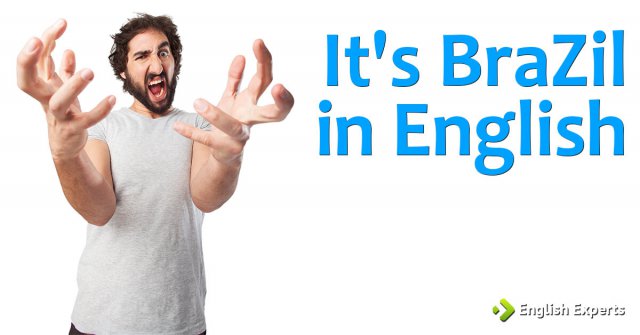 Hello, I have read and heard many Brazilians that argue about a silly letter in the English spelling of their country. Sure, we know it’s Brasil in Portuguese, but in English, it’s Brazil.I thought the whole thing was silly, but there was quite a fight about it on Wikipedia.

In short, the reason why the country is spelled BRAZIL in English is because this is what the country was called when it was founded.

Here is a quotation from an editor on Wikipedia to try to put an end to this silly debate:

Since many people interested in this debate are foreigners and thus don’t have in-depth knowledge of Brazilian History, I want to add Brazil used to be officially called “Imperio do Brazil”. To check this information, see the 1824 Brazilian Constitution in http://www.presidencia.gov.br/legislacao/constituicao where it’s published with the original grammar.

After the Republic was established, the country officially adopted “Republica dos Estados Unidos do Brazil” as its name. Yes, that’s right. Brazil with a “Z”. It surely gives us a very good explanation to why Brazil is spelt with a “z” in English – it’s the way it was originally spelt in Brazilian Portuguese too. Later, of course, “Brasil” was incorporated by grammar reforms and “Brazil” was scrapped, though in other languages (like English) the original spelling was maintained.

Ironically, turns out spelling Brazil with a “z” actually supports the original Brazilian Portuguese roots and therefore in no way diminishes Brazilian culture.

Anyhow, the etymologies of words in English or any language are complex, and it just takes a little digging. Another word, macaw, is the English word for arara. A Brazilian told me, why do you change the word totally for this word? I looked it up in an etymology dictionary and found the word comes from an old Portuguese word – macao. So there you go.

Finally, you should remember, you call the city of London, Londres and nobody there in London cares :)