Learning English by Reading About it in Portuguese: Why Isn’t it Effective? 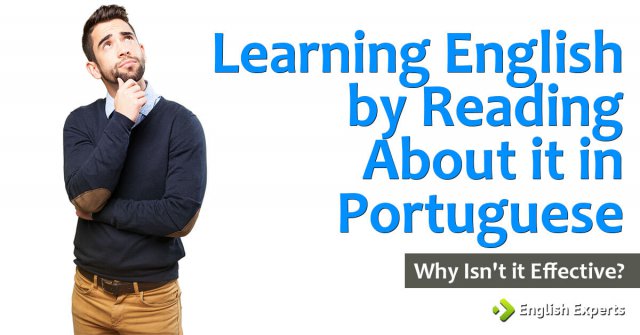 Many self-taught learners of English, especially beginners, choose to read about English grammar and vocabulary in Portuguese, for they feel insecure about reading a text in English. They think: I should start by reading explanations in Portuguese, and as I progress, I might introduce some English readings in my studies… This is a mistake, for several reasons.

When you read grammar explanations, you are exercising a process called learning, which is an auxiliary – and therefore secondary – process. In other words, you are learning “about” English rather than actually “learning English”. In order to become fluent in a language, whatever it may be, one should aim at acquisition, which is the process that makes you assimilate and master a language. It is a subconscious process, which takes place while your brain solves tasks and tries to communicate in the target language. It is the same process through which children learn to speak.

That doesn´t mean that the mother language – Portuguese – doesn´t play an important part in the process; it is a mistake to think it should be totally left aside. By contrasting new patterns and expressions of the target language (English) with known patterns and expressions in the mother language, the learners raise their linguistic awareness, which is extremely positive for their learning.

This means the learner should first deal with new information in the target language, and then associate it with the correspondent information in the mother language. For instance: you were reading a text in English and came across the sentence: “I was going on a date last night but the guy stood me up”. You should try to infer the meaning from the context, from the sentences before and after it, or resort to a monolingual dictionary. By doing this, you would understand the expression means the guy never showed up, I was alone waiting for him and he didn´t come. Then, I can contrast with Portuguese and make an association: “ah, stood me up quer dizer me ‘deu um bolo’…!”. This will help my learning and the next time I see this expression used in this context, I will remember its equivalent in Portuguese.

All in all, this is what the learner should know: the progress you will make by studying English through material written in Portuguese is limited. You should take the plunge and study monolingual material, as hard as it may seem at first. As your brain gets used to the new patterns, it will become easier. But remember: if your brain has to work hard to understand something, it will be less likely to forget it.