Minimalism and Simplicity: Around the World in 80 Years 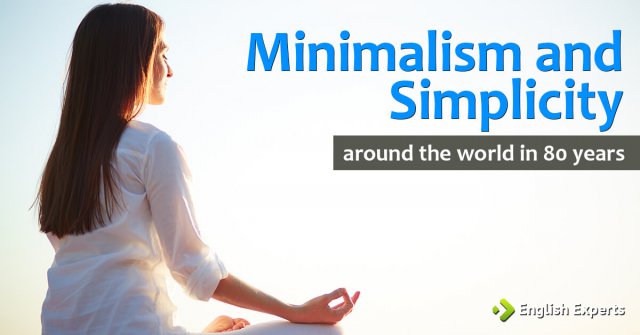 Hey guys… I just met that guy from my hotel again! Remember, the one who almost attacked me a few weeks ago? I finally found out why he reacted the way he did… and some of the things he told me really made a big impact on me. In fact, he is a fellow traveler on the path… he, too, has been traveling for many, many years. And he, too, has no intention of ever returning to his home country.

Anyway – I was just about to leave my room, as that same guy stood in front of me again… but this time, he stood there with a beaming smile, greeted me happily and apologized profusely for the way he had reacted the first time we met.

He also explained to me that he had just spent months and months as a hermit in the mountains… living alone, meditating all by himself and remaining in absolute silence for months. He had had no human contact… and he said he had to get used to speaking again!

I found that story fascinating, and so I told him: “Hey, I’m just on my way to grab some food – are you hungry, wanna come along?” He accepted, and our conversation only got more and more interesting…

People come toThailandfor all kinds of reasons. Some are looking for the pristine paradise they saw in DiCaprio’s movie “The Beach”… some want to experience “One Night in Bangkok” and see some of the world’s wildest night life… some are looking to go diving in the South, or riding elephants in the North… and others come here to meditate, as did my new friend.

I find Buddhism to be a fascinating religion. A couple of years ago, I spent some months in Singapore, visiting temples, reading books about Mahamudra and spending hours in meditation myself. And during that time, a monk told me a story I will never forget.

You see… in his order, the monks were not allowed to own any money – when they help someone, they do it out of the kindness of their hearts, but they never take payments. In fact, most have no possessions whatsoever, other than their robe and the bowl they eat from!

One day, however, he had given some spiritual counsel to a woman from town… and that lady was so grateful that she wanted to repay the favor in some way. She begged him to accept some money from her… but as you can imagine, the monk refused. Finally, she said – “Okay, I understand that you can’t take any money. So please think of something you need from town… maybe a tooth brush, or a pair of new shoes. And I will buy it for you as a gift.”

The monk finally accepted the generous offer, went back to his room and started thinking about what things he might find useful. A tooth brush would come in handy indeed… and his shoes were very worn out. After some time, he had compiled a list of items that would be useful to him – now it was only a matter of choosing the most important one to ask for.

But now he couldn’t make up his mind! Suddenly, all the items on the list seemed to be absolutely necessary… when he hadn’t missed any of them before the woman from town had made her offer. He cursed himself for letting himself get caught up in attachment to material objects again, decided to let go and ended up telling the woman that he changed his mind – he didn’t want anything from her. Possessions would only create the desire for MORE… and this form of desire is one that many Buddhists strive to eradicate in themselves once and for all.

I don’t know if I could ever go to the same extreme as this monk in Singapore… I certainly don’t want to live without a toothbrush! But there’s a part of this story that I can really identify with. When I was a teenager, I went on an exchange program for a year… it was to be the first time I would live overseas, and I had to make a similar decision as the monk: out of all my possessions, what should I take with me? Anything I’d leave behind, I wouldn’t be able to get a hold of for an entire year. After all, I was only allowed to bring a suit case and a small backpack on the plane with me.

But when the twelve months were up and I returned back to my home country, I realized something fascinating: during all that time, I didn’t miss any of the things I had left behind… not even once! Which brought me to a simple conclusion: Hey, if I can live without all this stuff for a year, then I can probably live without it forever.

And at that point, I decided to become a minimalist.

Today, all I own in this world is a backpack with some clothes and a laptop – that’s IT. In my opinion, all possessions are dead weight that tie me down and impinge on my freedom. As it stands now, I can go anywhere in the world at moment’s notice. If I wanted to, I could have breakfast in Sydneytomorrow morning… or in Hawaii, in Sicilyor even in Brazil. And that, to me, is worth much more than all the things we are conditioned to pile up in our modern society.

To quote the movie Fight Club: “The things you used to own… now they own you. We work in jobs we hate so that we can buy s*** we don’t need.” Truer words have never been spoken… and my friend, the hermit from the hotel, doesn’t own a lot of stuff either. Just like me, he owns some clothes and a computer to communicate with his folks back home… but that’s it.

And I’ll say one thing for this guy… once I got to know him better, he seemed to be one of the happiest, and most balanced people I’ve ever met. He is so in touch with his inner self, his emotions and his sensations that he can even sense what the weather is like… even when he’s alone in his room, with the windows closed and the shutters down. And that’s only the beginning of what he told me… maybe I will write a bit more about some of the things I learned from him in a future post.

If this article did inspire you to get rid of some things you’ll likely never look at again in your life, here’s some advice to get you started: Next time you come across an item that you haven’t used in a few months, throw it out. Chances are you’ll never use it again. And next time you come across an object in your house hold and you’re not sure, give yourself 30 seconds to think about it. If after 30 seconds you’re still undecided, throw that out too. You can also give it away… in fact, this philosophy of mine has saved some of my friends a bunch of money! ;-)

As always, leave me a comment and let me know what you think… if you had to leave your home country for a year, what would you take with you, other than the bare necessities? What’s the one thing you cannot live without?

I’m curious to hear your opinions!

Until next time, always the best…