Health Insurance on the road: Around the World in 80 Years 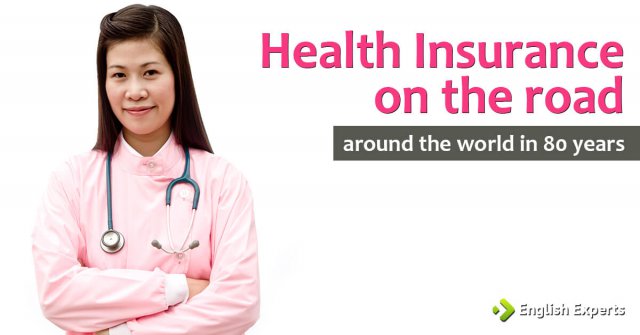 “We don’t pay for massages.”

What? I couldn’t believe my ears… how could she refuse to pay? This was outrageous… and I can’t deny it, I was really angry. But there wasn’t a whole lot I could do about it, other than just accept her answer… I hung up the phone, and decided to find a different solution.

Now, before you ask me what massages I’m talking about and why she didn’t pay for them, let me give you some background… and a fair warning. Today I will have to talk about one of the dark sides of long-term travel… one of the scariest things that can happen to you on the road.

It all began about a year ago in Manila, the capital of the Philippines. I was treading the pavement of what seemed like the entire city, a mega-metropolis of 12 million people, looking for an apartment… when I suddenly felt a sharp, crippling pain in my legs.

I played it off and thought it’s probably nothing serious – my grand-father had always told me: “any ailment that shows up out of the blue also disappears back to where it had come from”. I didn’t worry too much about it.

Unfortunately, he was wrong, this time… and after the pain persisted for about two weeks, I decided to see a doctor. Sports injury. Of course… I live a pretty athletic life style, and I like to work out at least 5 or 6 times a week. Apparently I had overdone it… and now I was in trouble.

And this is a question I get fairly frequently… what if you get sick in a foreign country? Who is going to take care of you? How are you even going to select the right doctor? And what kind of insurance will cover you when you’re 20,000 kilometers from home?

I used to think that I knew the answers to these questions… I had an international health insurance plan that I had paid into for about a decade, and I felt confident that they would cover me if I ever needed them. They had a good reputation and were part of a major bank. In fact, my personal banker had recommended them, and I trust her implicitly.

The medical bills from my sports injury in Manila started to pile up… I had to pay for MRI scans, X-Rays, doctor consultations, four sessions of physical therapy per week, acupuncture, all kinds of medication and even ultrasound and laser-therapy… all of which was indicated by the relevant doctors.

Yet it quickly became apparent that my insurance provider was going to leave me in the rain… after over ten years of paying my dues every year, I finally needed their help for the first time – my first serious injury abroad. But when I sent my medical bills in for approval, they just replied: “We don’t pay for massages.”

I never had a single massage as part of my treatment… but that was their excuse so they wouldn’t have to cover the physical therapy sessions. And not only that… they kicked me out of their insurance plan and said they would never insure me again.
I was so frustrated and angry, and I really felt cheated. What a scam! Health insurance my eye… they collect for a decade, and then kick me out when I finally need them? There was a part of me that wanted to get a lawyer and pursue this matter in court. But that would only imply an even greater investment of time, money, energy and frustration… and I believe life’s too short for war.

I suppose that’s the insurance industry… it’s just another for-profit corporation, looking for ways to minimize costs if they can get away with it. There isn’t that much us “little guys” can do – we’re pretty much at the mercy of these huge, powerful organizations. Though a friend of mine actually had some good advice for me, and while it came a bit too late in my situation, it might help you out in the future, so I’ll share it… this is what he told me:

“Look, here’s the secret – if she won’t help you, ask to talk to her boss. If HE won’t help you, ask to speak to HIS boss. Eventually, at some point, you’ll reach someone who thinks it isn’t worth his time to have to deal with your headache who’ll just give you what you want. For someone higher up, it just isn’t worth the hassle.” Or as they say in England: the squeaky wheel gets the grease. It’s just a question of whether or not it’s worth the hassle for YOU or not, to cause that drama to get what you want.

But as always, there is a silver lining… one of the great things about traveling for a long time is that you start to build a massive network of personal connections around the globe… and thanks to my network, I’m in touch with fellow perpetual travelers. I ended up meeting two of them in Manila for dinner a week later, and they had some recommendations for me… international health insurance providers that cover people from just about any country in the world.

I’m actually still in the process of comparing these providers to each other, but two of the most reputable international health insurances for travelers are apparently:

I will keep you posted as I find out more about them. I’ve grown a bit mistrustful of insurance providers in general, to be frank (if you pardon the pun)… but I suppose it’s probably a good idea to get at least the basics covered.

Alternatives are staying in countries where (1) public health care is free, or (2) private health care is very cheap. That’s probably a topic for another post, but if you’re at all interested in such things, you might look into the book “Patients Beyond Borders”. It’s the leading guide book on so-called “medical tourism”… something you might want to research on Google if it sounds like it could be useful to you. Here in Thailand, for example, private clinics are world-class and dirt-cheap.

So, this was a bit of a rant… I apologize about that. But some readers asked me about international health insurance, and my first-hand experiences haven’t been the best, despite choosing a reputable agency. So be very careful with your selection, read all the fine print and consider paying out of pocket wherever you can. Not ideal, but in some cases it might just be the better option.

Have you made frustrating experiences with insurance providers before? Or have you found a really good one? Let us all know in the comments below, I’m sure your knowledge could be useful to other people as well.

Thanks for reading, and I’ll be back with a more optimistic article shortly… I promise. There are hassles to be faced, no matter where you go – but I still maintain that life on the road is 99% positive. And soon I’ll write more about some of the (good) life-changing Kodak-moments you can experience while traveling the world.

So leave me a comment below, and we’ll talk soon…