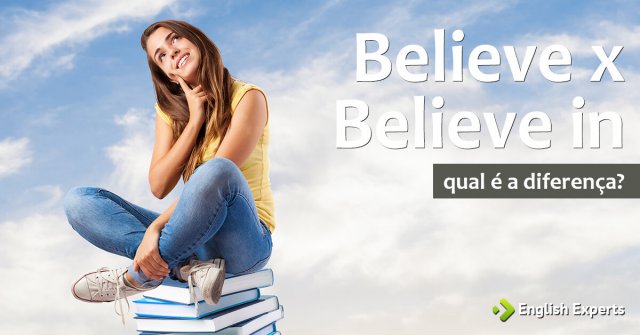 When I arrived in Brazil in 2001, I didn’t speak a lick of (a bit of) Portuguese. Sem fazer nem uma aula de português, eu aprendi na prática. Interestingly enough, I learned quite a bit while giving English lessons. I started noticing certain mistakes that were repeated by all of my students, and came to the conclusion that they must be translating directly from português. In turn that helped me learn the structure of the Portuguese language.

One mistake I noticed across the board was the use of “believe in”, “acreditar em”. I would often find my students making comments like, “I was late for work because the traffic was terrible, but I don’t think my boss believed in me.”; or if he or she said something that surprised me the response to my surprise was, “You don’t believe in me?!”

At first I didn’t get it. I thought to myself, “Wow, there are a lot of undervalued people in this country!” However, the more often I heard this mistake, the more I realized that in colloquial Portuguese “acreditar em” a maioria das vezes simply means to believe.

A little confused? See, in English “to believe something/someone” and “to believe in something/someone” have different meanings. For example, if your teenage daughter comes home at 3 a.m. smelling of alcohol and tells you she was at a friend’s house “just watching movies”, you would say, “I don’t believe you!” However, if you were to tell her, “I don’t believe in you”, well, you’d be considered a pretty lousy parent; for if there is one thing a parent should never do, it is to stop believing in their children.

When you “believe someone” it means you accept that what this person is saying is true. In the above situation, your daughter is not telling the truth, so you don’t believe her. When you “believe in someone” it means you accept the existence of or recognize the value of that person. So, if you don’t believe in your daughter, or son, or whomever, then you simply don’t recognize that this person exists. He or she means nothing to you, holds no value for you.

When a father tells his son that Santa Claus will arrive on Christmas Eve to leave tons of presents under the tree, if the son no longer believes in Santa then he will not believe his father.

If a friend confesses to you one day that she has seen a ghost, and you tell her that you too have seen one, then you believe her; and therefore the two of you can say you believe in ghosts.

Have I clarified the difference for you? I hope so! Now, can anyone else think of examples of how to use these terms correctly?