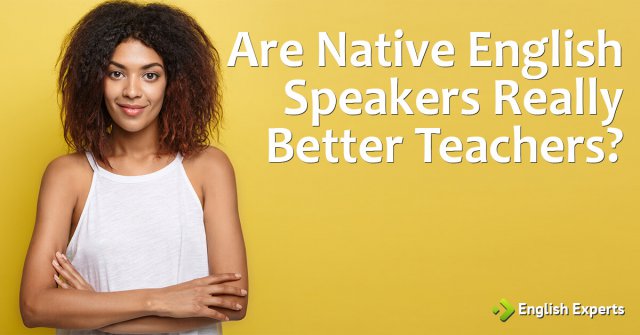 I’m an American English teacher living in Belo Horizonte, and after three years of teaching, it has become increasingly clear to me that the majority of Brazilians have a very strong belief that native speaking teachers are superior to non-natives/Brazilian teachers.

I’ve thought a lot about this, and even though I’ve really benefited from this, it has always seemed a bit strange to me. To be honest, the more I teach and learn about my strengths and weaknesses, the more this idea seems limited, and in some cases, absurd. It’s really much more complicated than people think.

This article will explore the “native vs non-native” topic from a balanced perspective, and it will attempt to separate fact from fiction. Are native speakers really better, and if so, in what areas and why? What are the advantages of being a non-native when teaching English?

Before anything, let’s clarify one fact.

The most important characteristic of any English teacher

The most important thing is not whether or not the teacher is native speaker or not, but rather if they have know how to teach to the level of their students, if it’s something they are passionate about it, and if they are willing to put the effort in to prepare a good class.

This is common sense.

Some people are naturally good teachers, while others need to work hard. Both types can be successful, but both demand preparation and the intention to help people learn. Having a high or even native proficiency helps a lot, but it’s not a substitute for work ethic and a genuine desire to do a good job.

Some teachers (both native and non-native speakers) have a natural ability and/or strong proficiency but simply don’t know how to teach (or are too lazy to learn). Apart from this, a native teacher is not a magical solution to your English learning problems. If you don’t have a strong desire to learn and dedication to your process, not even the best teacher in the world can help you.

With this said, what are the advantages of both native and non-native English teachers? Let’s start with the underrepresented advantages of being a non-native teacher, then explore what I feel to be the strong points of native speaking teachers, and I’ll tie them together at the end.

Advantages of being a Brazilian/non-native English teacher

The biggest advantage, without a doubt, that non-natives have is that they have consciously learned the language step by step and can guide their students through the labyrinth of confusion that they have already conquered. Native speakers, on the other hand, unconsciously inherit the language from theirs parents and often find themselves struggling to teach certain aspects of grammar or understand what students are going through.

In my case, I’ve learned/been learning languages for the past 8 years (Spanish first, and now Portuguese), and while this gives me immense insight into the language learning process, I still don’t know what it’s really like to learn English. Teachers who have learned the English language through their own blood, sweat and tears have a much greater ability to see through their students’ eyes via their own process.

In addition to understanding the student’s learning of English, a Brazilian English teacher will understand the student’s culture, and be able to cross-reference English through the eyes of Brazilian culture. A good example of this is how Lula is used to teach the “Th” sound in English (Bra-th-ileiros).

Another advantage is that non-native English teachers generally become teachers for reasons that suggest teaching ability and interest in the language. Most Brazilian teachers that I know teach because its something they feel motivated to do, something they enjoy, something they are good at, and something they have received professional training for.

Having a passion for what you teach is a priceless advantage because the teacher’s enthusiasm is totally contagious to not only the student, but other teachers too. I personally know (and learn A TON from) a handful of extremely talented Brazilian English teachers who are complete rock stars at what they do, and although they don’t have the native “brand” on their forehead, or a foreign accent when they speak Portuguese, their students learn from the best, and they learn fast, and they have fun doing it.

The point is that Brazilian English teachers have many significant advantages that are overlooked in favor of the exaggerated and often inaccurate idea that native speakers are simply far better teachers. That’s not to say that native speakers aren’t naturally better in some areas, but it’s important to have a balanced perspective and give Brazilian English teachers credit where credit is due.

Advantages of being a Native speaking English teacher

First of all, native speakers feel extremely comfortable using the language in a playful and dynamic way that can do a lot to facilitate learning. This takes the pressure off of the grammar and can make the learning experience much more authentic, light and fun.

A native speaker’s repertoire of vocabulary and expressions is going to be so much richer than a non-native can ever be. Of course there are impressive exceptions, but a native’s use of the language, and especially slang and the more dynamic aspects of the language (which are often deeply rooted in the culture) are nearly impossible to emulate by non-native speakers.

The exception though is the .01% of extremely gifted Brazilian learners/ teachers who have learned to use and teach certain aspects of the language that transcend grammar. I’ve only met a few of these teachers ever, but they can emulate a native speaker in not just following the grammar rules, but in breaking them, and then effectively teach it (which few books do). This is mastery that is beyond the scope of the native/ non-native question.

Another advantage about native speakers is that their students generally feel more motivated to speak in English in class. The fact that the teacher is from an English speaking country and not the country of the students generally works as an unconscious trigger for the student to speak the language. This may have nothing to do with the teacher’s proficiency or teaching ability.

The final advantage, which is the most popular, is that a native born teacher will teach or transmit much better pronunciation. This is for sure an advantage, but what a lot of people don’t know is that it’s difficult for beginners and lower intermediate students take advantage of this. In my opinion, upper intermediate and advanced students will benefit a lot more.

With hard work, good strategies, and a little effort, however, anybody can drastically improve their pronunciation without the help of a native teacher, or even by themselves.

Going beyond the Stereotypes

While it’s true that there are clear advantages and disadvantages to both native and non-native speaking English teachers, it’s important to recognize how complicated and full of misconceptions this topic is.

In my opinion, the perceived superiority of native speaking teaching abilities is greatly exaggerated and limited to only certain aspects of teaching, while the advantages of Brazilian teachers, which are many, are completely ignored.

What are your thoughts and experiences? Does Brazilian pop culture and English learning have a hard time valuing its own English teachers to the same extent as it does with native speakers? I would love to hear your ideas and different perspectives on this below.

About the Author: Justin Murray was born and raised in Seattle, Washington, but he currently lives in Belo Horizonte, Brazil. He is the founder of the hot new ESL blog, Real Life English.