What is/was your nickname? 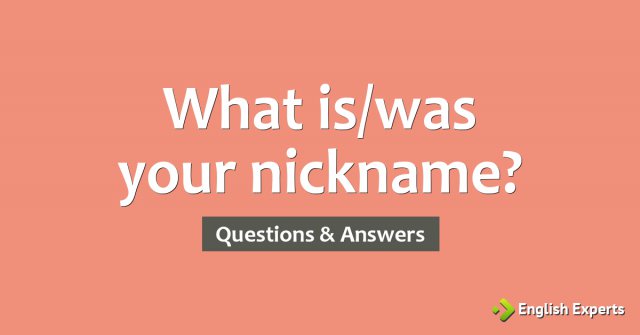 - When I was around 12 I grew up much faster than my friends and for this reason they started to call me "giraffe" but after some time they also grow up and now I'm among the shortest ones in the group;
- When I was in high school everybody had a nickname in the class, but I'd better not mention them here;
- I don't have any nickname;
- Flá, Flavinha, Flavita, etc.

ENG_rafael 10 Top Posters - 26 Abr 2011, 19:19
At college my nickname is Toscana, it is weird and non-sense. Rafa or Fael is common, mainly between my family. There is another nick that is Torresmo, due to my last name that sounds like that.
See you fellows!
Votar 0

Gúuh 06 Jul 2011, 12:07
My nickname is Guh, that's the way that many people call me.
My parents call me of "alemão", because when I was around 3 until my 12 years old,
I had a very white skin and blond hair.
Now, I'm just white, unfortunately my blond hairs don't exist anymore kkkk LOL
Votar 0

I don't recollect having any normal nickname in my youthhood.
Votar 0

w.slayman 110 Native Speaker - 06 Jul 2011, 15:16
I am a Junior, (William J. Slayman, Jr.), and my mother, Mary, had a cousin, uncle and brother in law who's name were William. In the USA the common nickname for William is Bill, therefore as a boy the nicknames for all the Bills were "Uncle Bill", "Cousin Bill", "Brother (in law) Bill", my father was "Mary's Bill and I was "Little Bill". Today I am still "Little Bill" to Aunt Annalaura, my only surviving aunt or uncle. The rest of the world calls me Bill, except Cristina, my wife, who calls me William because once I laughed at her pronunciation of Bill. My son is also William J., but he is called B.J., short for Bill J. which I guess is better than "Tiny Bill".

What a confusing situtation.

Hugo d'Brito 06 Jul 2011, 23:29
In my childhood, my friends and relatives used to call me "Cabrito", due to my last name which is similar to that. Nowadays, everyone calls me "Kido", without any particular reason as far as I know. Maybe because of the childish attitudes I have sometimes.

Samuelosilva 10 Jul 2011, 04:18
Everyone in my family, brothers and sister, mother, uncle, nephews, some near friend and my wife call me muel, when i was a child i used call by the name samuca
Votar 0

64well 09 Mai 2012, 21:14
Called me Oracle because I didn't talk very much, I talked little, but when I talked, what I said was like a bomb exploding, wise words, my peers said I talked only the necessary.
Votar 0

Because I'm so white I reflect light back into space and I have a blonde hair.
Votar 0