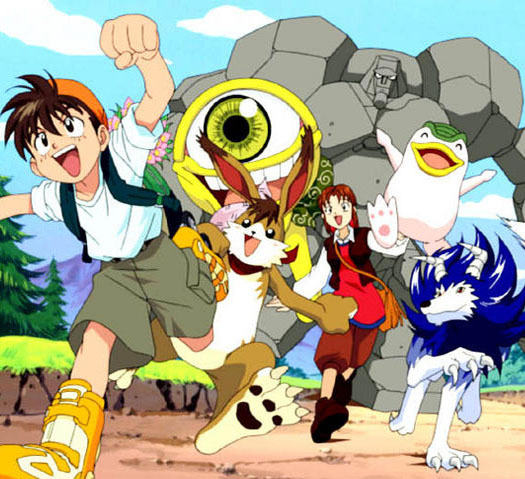 Monster Rancher is an anime based on Tecmo's Monster Rancher video game franchise. In Japan, it is a.k.a. Monster Farm (モンスターファーム Monsutā Fāmu). Tecmo Co., Ltd. (テクモ株式会社 Tekumo kabushikigaisha), was a Japanese video game corporation founded in 1967. It had its headquarters in Kudankita, Chiyoda, Tokyo. Its subsidiary, Tecmo Inc, was located in Torrance, California. Tecmo Co., Ltd was defunct on April 1st, 2010 and its video game franchises are now published by Koei Tecmo Games.

The anime was originally aired on Japanese television on TBS from April 17, 1999 to September 30, 2001. An English-language version by Bohbot Entertainment and ADV Films aired in North America on Fox Kids and YTV. In Japan, the program existed as two separate series: The Secret of the Stone Disk (円盤石の秘密 Enbanseki no Himitsu) for episodes 1-48 and The Legendary Path (伝説への道 Densetsu e no Michi) for episodes 49-73. In North America, most of the scenes were edited due to the censorship and the anime was divided into three seasons.

In Brazil, the edited version of Monster Rancher premiered on TV Globinho, a popular children's television program produced by Rede Globo. It was aired from 2001 to 2005. In 2006, the other TV stations started to show the anime, specially at 7 pm from Monday to Saturday, which includes Band Kids, Play TV and FanPix programs. In Portugal, the third season - from episode 49 to 73 - was not broadcasted.

In the popular Monster Rancher competition, a young boy named Genki Sakura wins the final and becomes the champion. One day after school, Genki finds a Monster Rancher 200X CD-ROM delivered to his home. It is the grand prize he has won in the competition. Genki begins to play the new game and at the very moment he tries to generate a monster, he finds himself transported into Pangea continent. There, he meets a girl named Holly and her best friend Suezo and soon realizes that the monsters are given life by scanning special stone disks within temples. In order to save the land from an evil and mysterious ruler, they must find the stone disk which constains a legendary and powerful fire bird, but they bring forth a different sort of monster, which Genki calls Mocchi. Now, they and their other monster companions go on a quest to find the stone disk that contains the Phoenix, the only monster capable enough to destroy the evil Moo.

Follow attached the English version of the anime opening theme:
One of the main ads of the dubbed version was a collection of bumps called Unlock Your Disk. On children's television networks, they are sometimes called external eyecatches due to the resemblance of internal eyecatches in anime. These ads are often developed to marketing purposes, not only to alert children that the commercial break has ended.

Follow attached a video about Unlock Your Video bump featured on the first season of Monster Rancher series:
You'll find more Unlock Your Disk videos as long as you watch the anime. Here are the lyrics: