Have you ever broken a bone? 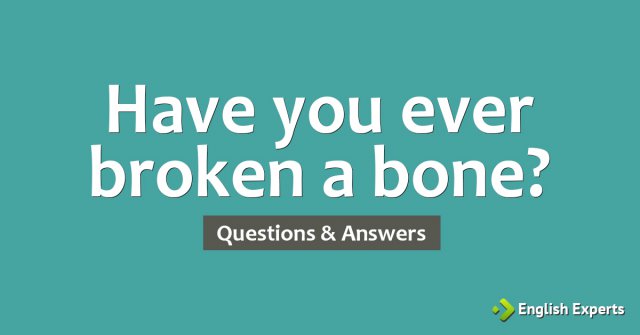 - Yes, many times when playing soccer;
- Once I was stealing mangoes, fell from a tree and broke my leg;
- Little Flavia once thought she could fly, threw herself on a hammock, the 'landing' did not work well and there she was on the floor, screaming of pain. Three weeks with the left arm in plaster.

Marcio_Farias 12570 •1 •23 •212 Expert Member - 28 Jun 2010, 09:16
Six-year-old Márcio once thought he could do a handstand on the bed but, alas, his left hand utterly missed it and, yes, he landed on and broke his arm. In an earlier episode, he had fallen head first into the backyard, uderground concrete water tank. The top of his head took most of the blunt. Luckily (or perhaps unluckily) for him the tank contained no water, or else he'd have drowned. But oh boy, he bled something fierce, his Dad worrying himself silly over his fate.
Votar 0

You said,... screaming of pain. I believe the American English expression is "screaming in pain" or "crying in pain"[/i], which is a shortened form of "screaming while in pain"

This is a very minor suggestion. Most people who do not speak American English as a first language would not notice, otherwise extremely well done, as usual.
Votar 0

I have two suggestions, the first is a spelling error "uderground" should be "underground", and the second is word selection and usage, change "blow for blunt", so the sentence reads "The top of his head took most of the blow".

I was flying a U.S. Army, UH1D "Huey" helicopter on a routine resupply mission between Da Nang and Phu Bai, South Viet Nam. While over the Hai Van Pass we received ground fire from a 12.7mm heavy machine gun, which disabled the aircraft, and caused it to crash into the jungle covered mountains at a speed of about 90 miles per hour. All four soldiers onboard survived with various injuries, mine were the most severe as I found out three days later when I regained consciousness, and saw the plaster cast covering almost everything from both feet to my right shoulder.

Between the bullets and the damage done by the crash I had twenty one broken bones. They included both tibia, both fibula, both femurs, one ilium, three lumbar vertabrae, six ribs, the sternum, one radius, one ulna, one clavicle, and one humerus, which after reflection, I decided was not very humorous at all (pun intended

). Thirteen months, seven surgeries and five pounds of stainless steel later I was released from the Erwin U.S. Army Hospital and returned to duty.

Now the students and members of English Experts can open their dictionaries and start looking up bones, and converting english measurements to metric.

Flavia.lm escreveu:Flávia's 1st reaction: "so nice to have Bill here, sharing with us so interesting information about his life..."
Flávia 2nd reaction: "it is so out of my reality... seems like a movie..."
3rd: OH MY GOD

1st. It is so nice to ... with us such interesting.
2nd it is so far out of my realm of reality

Since the time I was a little boy I was always adventurous, and daring (some say fool hardy), and could never refuse a dare to jump off the highest diving board or climb the highest tree, or catch a snake, I refused to admit that I was afraid of anything, and would do just about anything. I guess that I just like to live life to the fullest, that is why I purchased a 1500 cc Harley Davidson motorcycle when I was 60 years old, walked the city streets of Sao Paulo alone at night, and want to spend a couple of weeks in the Pantanal, swim with the pink dolhins in the Amazon and ride a motorcycle over the Andes into Peru. I loved my job in the Army, and was willing to take risks to do what ever the mission required, sometimes the risks won sometimes I did. But as the French say "Cest La Guerre". I would do it all over again.
Votar 0

ailime 80 •1 Top Posters - 29 Jun 2010, 06:19
No, fortunately I have never broken it. When I was a teenager I twisted my ankle and the pain was so strong that I thought I had broken a bone. It was terrible to stay a week with plaster cast because it`s uncomfortable and itchy.
Votar 0

Bacca escreveu:No, I have never broken a bone.

aeduardo escreveu:I had fun very when I was children. Fortunatelly, I never broke a bone.

I would like to make a few changes with word selection and construction.

I had a lot of fun when I was a child. Fortunately, I never broke a bone.
Votar 0

I didn't study the words very/a lot and others.
Votar 0

Logan18 escreveu:I broked my left arm when I fell by my veranda thinking I was the " Ninja Jiraya"!!

Try, "I broke my left arm when I fell off my veranda, thinking I was the 'Ninja Jiraya' "

BrunoCosta Top Posters - 01 Set 2010, 22:34
No,I have never either.And I'm the kind of guy that like to jump and do all the kind of child's thing,since I used to be one.But in the other hand I'm very carefull.I know all the risks I'm taking and so I can mesure the hole situation as an adult really;)
Votar 0

leandrocs1310 25 Top Posters - 06 Set 2010, 11:02
No, I've never broken a bone, at least I think I haven't, once at school, in PE class, I was playing Dodgeball, and a girl fell over me and over my fist, later, I couldn't move it, it was weak, a lot of girls came to help me, wet my hand, lol, it was a little weird, but I think it got better. Recently, my stepbrother and I was playing the same game, and he threw the ball exactly to my thumb, which was outstretched, it hurt a lot, I couldn't move it (again) and it couldn't flex totally, any pressure made it hurt, but nowadays, it doesn't hurt, but it still can't flex totally! I don't know why, and until now, my right thumb is the double than my left thumb!
Votar 0