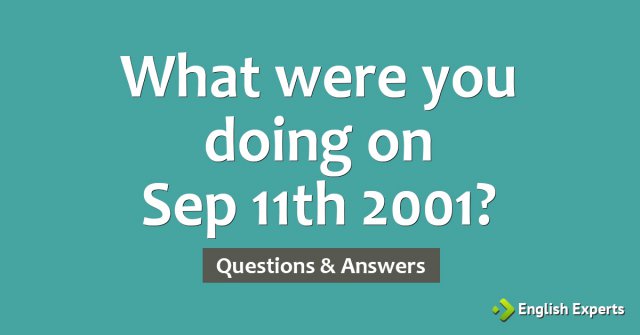 I was working. I remember that at that time Internet was not so accessible and only one person in the office had it. When she told us about what had happened in Manhattan, I first thought it was an accident. But, a few seconds after, when the second plane crashed into the other tower of WTC, everybody realized US was being attacked. I remember that the Brazilian TV did a good coverage of the attacks at that time.

Some years later I watched the movie "World Trade Center" (with Nicholas Cage) and the documentary Fahrenheit 9/11, and found them very moving, especially because I watched them sitting beside a firefighter.

Then I visited the Ground Zero in 2010. And, although I had some mixed feelings - I got a bit indignant at the market thing they created around there, and about the new tower being built at full steam - I also felt very sorry for the people who died, for the ones who gave their lives trying to save others, and for the victim's relatives who still go there every day to pray and leave some flowers.

ENG_rafael 10 Top Posters - 07 Set 2011, 15:10
Ow, I remember that day, for sure, because it impressed me a lot. I was very young, about twelve, and was going back from school, that day was cloudy and a little cold in my area, and when I got home, the news was told me, I got scared, since it was the first and maybe the only one time I see a huge disaster like that, in terms of broadcasting. For sure, USA have caused more damage than suffered, but that episode was terrible, people were scared, thinking that event would be just one from a lot about to happen.

That event was so peculiar and terrible that I am capable to remember almost everything from that day, for instance, things which were commented, which I had for breakfast and so on, words my grandma told me, her sad statements about this mean and nasty world. In short, that day I was going back from school when the episode happend.

Taka 5 07 Set 2011, 20:49
I was thirteen years old and I was watching TV, I don't remember which cartoon, but all channels only speaks and showing the images of the airplane crashing in the World Trade Center and I complained because I wanted see cartoons.
So I went to school and everybody talked about it, so I’ve starting understanding the situation.
Votar 0

anita 145 •7 Top Posters - 11 Set 2011, 23:18
My answer could be pretty similar to Rafael's in terms of my feelings that day. I remember everything in detail, as well, for it was so touching!
I was a senior high school student and I was still having classes that chilly Tuesday when the principal entered our classroom in despair and let us know about it all. It was our last class and she dismissed only my group a little earlier so that we could see the news on TV. Everybody got shocked and wondering what it all could have as a consequence. I remember walking home by myself wondering what would make someone kill themself by crashing into a place full of people working and making money for their families or in order to achieve their personal goals whatever they were. Anyways, I tried having lunch while watching CNN coverage on the happening, but I just couldn't (even though it was my favorite dish). It was a long day full of pain and sad feelings not only for those who lost their beloved ones, but also for all the other people who somehow sympathized with what had happened.
As Rafael suggested, I couldn't help thinking that it was the first impressive world news that had happened in my lifetime, but I wasn't proud of it. I just wished it could have been a nicer event like a music festival or a great humanitarian deed. Later on, I was sad with the war that broke out since I wanted the USA to prove the opposite. Well, that's pretty much what I can say about it. Thanks for letting us share, Flávia.
Votar 0

canascim 15 Set 2011, 20:23
UNforgettable day. I was working hard, and started hearing people saying:
"did you see what happened, the twin towers are down. The terrorists crashed airplanes against the towers".

I really thought it was a joking and kept working for a long time, but everybody was talking about that. When i decided to check on the internet, i realized that unfortunatly, it was true, but there were more, there was the one that was crashed against Pentágono Headquarter and the was that was supposed to fall in Whitehouse.

Until today, i watch TV, see the images and it seems it is a completely nightmare.

Paulo Aguiar 22 Abr 2012, 16:22
I was a child and was in the hospital. When i came at home and turned on the television i saw breaking news. But i couldn't understand very well what was happening. Some years late I understood it was a big problem.
Votar 0

antoniocmf 23 Abr 2012, 23:19
I was playing my firetruck toy when my father started to scream , he was terrified , he thought that the terrorists where going to attack São Paulo too , and then he called everyone and announced that nobody was going out until the things calmed down. So...that's the history about how my family and me reacted to Sep 11th 2001.
Votar 0

Allissonsc 06 Jun 2013, 22:08
I was only 6 years old and I was watching TV when came the whole news saying about it, and I get terrified. I was completely sad.
Votar 0

Marcos 3355 •4 •17 •72 Expert Member - 15 Nov 2013, 19:29
I was just a kid (12) and I was in my break time at school. I remember being at the library watching Dragon Ball Z alonside some classmates when suddenly the TV started to show what was happening there (in US), I had no idea what was it, the first tower has been hit and then I just saw the second one being hit too. I didn't pay much attention (I was just a child), but I remember being angry 'cause they have stopped my favourite Tv show (anime) in order to show the news about that terrible terrorism act. Just sometime (maybe years) later I realized how bad and horrible that event was.
Votar 0

melkysalem 03 Dez 2013, 15:45
I remember that like if it was yesterday. I got out from school, at that time I was doing the elementary school, and I got fast in home to watch Dragon Ball Z, but when I turn on tv I saw one of the Twin Tower in flame, I remember that one already was destroyed, I didn't think too much about that, I was 13 years old, and after that I went to a lake with friend to bathe. I remember someone ask me if I know what's happening, but I didn't know.
Votar 0

Andehrson 20 Dez 2013, 21:10
I was on bus listening to music on my cell phone and talking with a friend returning from a course that we used to do when suddenly I listened to that news and said to her: "Wow! a plane has just crashed into a tower right now" and everybody in the bus looked to me scared. then a guy who was in front of me said: "Oh boy, I heard too!" We couldn't believe on that! I think, up to today it's - at least - a little bit hard to believe and very weird remember that day!
Finally, please, if there's anything wrong on my text, tell me!
Votar 0