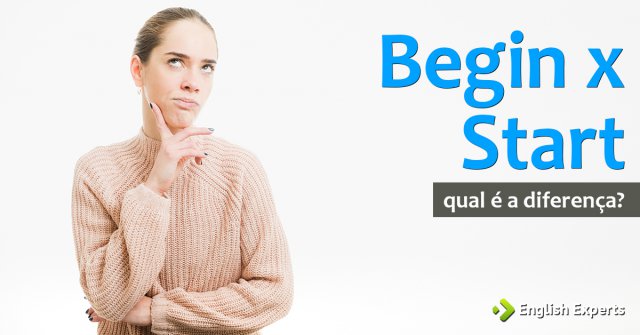 1: Could you please teach me the difference of 'begin' and 'start'? I looked up the dictionary but they seem to have the same meanings. I would like to ask if these words have the formal or informal meanings.

Another difficult one! I think there is only a slight difference, which is that if you begin doing something it can suggest that the same thing happens quite often. E.g. I begin writing my blogs at 7pm every day. On the other hand, ‘start’ is more often used the first ever time you do something. For example, ‘I started playing piano when I was 6’. Oooh it’s a very small difference and I think you can use them fairly interchangeably. Do our readers have any other ideas?

I hope that helps!
Votar 0

Begin or start?
De English Grammar Today
We can use the verbs begin and start to mean the same thing but begin is more formal than start. Begin is an irregular verb. Its past simple form is began and its -ed form is begun:

When did you begin learning English?

The meeting didn’t start until 9 pm.

We use start, but not begin, to talk about machines:

Press this button to start the printer.

Not: …to begin the printer.

The lawnmower won’t start. (this means that it doesn’t work)

Not: The lawnmower won’t begin.

Start, but not begin, is used to talk about creating a new business:

She started a new restaurant and it’s been going really well.

Not: She began a new restaurant …