Gun battles, summary executions, torture sessions and bodies incinerated inside car tyres: it might sound like the nightly news in Rio, an increasingly violent city, but these are scenes from Tropa de Elite or Elite Squad, a new film that has taken Brazil by storm - even though it has yet to be released. (Guardian.co.uk) 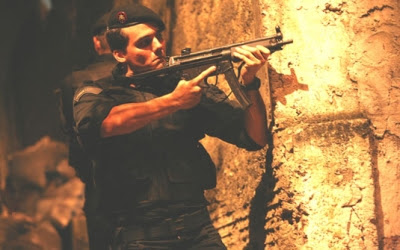 Tiago Tafari Catelam 3 Expert Member · 27 Set 2010, 21:39
And here is the (biased) English trailer of the movie:
They grew up together, in the world's most dangerous city.
Watching the criminals rule the street and the corrupt run the law.
But when the city claimed, the ones they loved, their only choice was to join the fight.
Now, they'll enter the nation's top police force, to clean up the crime on both sides of the law.

By the way, I'd like to share the following video with you guys:
It shows some parts of the movie dubbed in English!

It's really funny to watch, especially for those who watched the movie already. Here goes the transcription I made:

About face!
Let's go! You will never be one of us!
No, never! Never!
Attention 12!
Yes Sir!
You are the new team leader!
Sir, Sir... I give up Sir!
All right!
Hahaha, you do!
You are making all of us very happy. Indeed you're making this easy. Much thanks to you gentlemen! What a great day!
Attention 08!

Maria.
So I guess I'm the last to find out.
What? What happened?
What happened? The head of the slum showed me this. You are a cop! And boy, is he pissed! You know how long it took me to set up the outreach program down there? Do you know how hard it was for me to get that going?
Calm down Maria, calm down!
Calm down? You put me in a situation where my life was at risk. My life was threatened!
Be calm. Listen, you don't have to shout.
You don't get it. My life was being treated!
Can I speak?
No, we're talking about my life here and my friend's lives!
Look Maria, I'm sorry for everything, but I just couldn't tell you.
I can't believe a word that you've said.
I'm telling you the truth, I swear.
All right! f*ck it. You expect me to believe some lying son of a bitch like you? I can't trust a single word you say!
Maria! Maria!

You'll tell me if I do something wrong, right?
He is so quite, isn't he? Don't make it too loose, make it a little tighter.
Choosing a replacement for a captain like me isn't as easy as it might seen.
Anyone good in boot camp?
Yeah, there is this one guy who is really promising.
He is good, hum?
Yeah, he is a maniac and he is just like me when I went through it.
Choosing the best guy in the group wouldn’t do. I couldn't leave my man without making sure that they'd be all taking care of.
I'm glad you found someone.
Yeah, I think that it will be all done within a month or so.


PS: Let me know if I made any mistake in my transcriptions, ok?