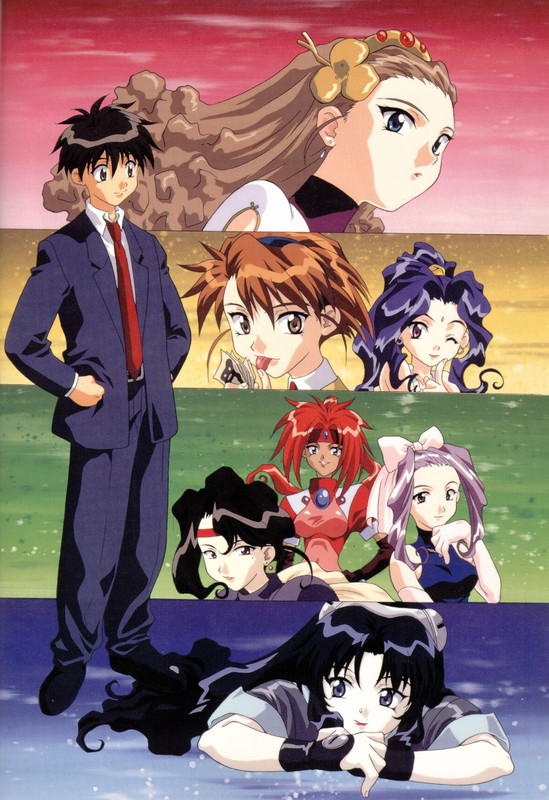 El-Hazard: The Wanderers, known in Japan as simply El-Hazard (エルハザード Eru Hazādo) is an anime version of the OVA (Original Video Animation) storyline and franchise of same name known as El-Hazard: The Magnificent World (神秘の世界エルハザード Shinpi no Sekai Eru Hazādo, lit. The Magnificent World of El-Hazard). The franchise was developed in 1995; the anime version was stretched to twenty-six episodes and released in 1998, eliminating or altering several of the OVA's major characters.

The story focuses on three high school students, Makoto Mizuhara, and the siblings, Katsuhiko Jinnai and Nanami Jinnai, and the History teacher Masamichi Fujisawa, who are mysteriously transported to the fantastical world of El-Hazard (El-Aventura, in Brazilian version). El-Hazard is threatened by a possible war between the human nations and the insectoid Bugrom tribe. One of the only options to stop the war is the Eye of God, an ultimate superweapon, created by an ancient civilization. In Wanderers, Jinnai attempts to use Ifurita, the Goddess of Destruction to control the superweapon, but once connected, Ifurita's true purpose is revealed and she attempts to destroy the world. In order to stop them, Makoto needs to learn how to use the Eye of God with Princess Rune Venus' help before it is too late.

The original and first anime opening version was Illusion, performed by INVOICE [from episode 01 to 16]. The second opening theme was Atsui no Kimochi (あつい気持ち, lit. Hot Feelings) released by ONESTEP COMMUNICATE [from episode 17 to 26]. Shane August was responsible to compose all English versions of El Hazard main themes and performed the opening themes.

The main closing theme was Bukiyou Janakya Koi wa Dekinai (不器用じゃなきゃ恋はできない, lit. You can't love if you're not clumsy) written and performed by Etsuko Kozakura, Kikuko Inoue, and Rio Natsuki. Clever is the English version of the closing theme and it was performed by Melissa Fahn.

In Brazil, only the first opening and the closing themes were officially adapted as Ilusão by Nil Bernardes and Pra se amar só é preciso ser extrovertido by Nísia Back in 1999.

(1) To be overflowing (AmE) = To be filled with overflowing of something (emotions) = Estar cheio(-a) / completamente dominado(-a) por sentimentos / sensações [geralmente prestes a serem expressados / revelados]. In Brazil, we have a similar expression, which is "estar se contendo / segurando", but it is more used to mean when someone is holding his / her feelings in order to avoid facing something bad or undesirable. The literal translation, which is "estar transbordando" is more associated to the English cultural meaning. When someone overflows with thoughts or feelings, he / she express them strongly.