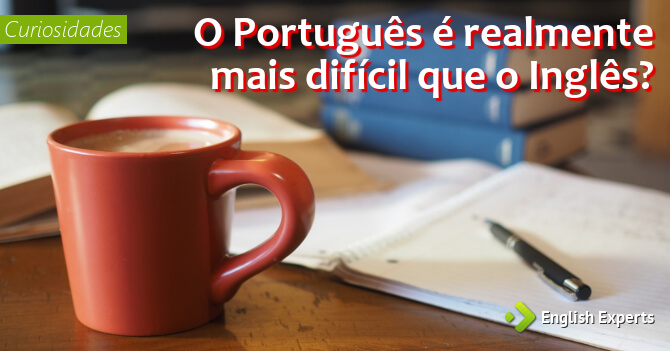 Judy Friedkin 760 •2 •21 Expert Member - 16 Jun 2017, 15:22
I think whenever you learn a language which uses a different system than yours, you think it is more difficult than your language. English has a more simple grammar, no masculine or feminine with agreement , an easier verb system, but it is not phonetic and has many difficult prepositions to learn. Learning Spanish was very difficult for me. After Spanish, Portuguese was much easier. I think the answer to this question depends on what language is your native language and what your point of view is. I don't think there is any real answer to this question. In the scale of difficulty of languages, we are both on the same level.
Votar 4
MENSAGEM PATROCINADA Faça um teste de inglês e descubra seu nível em 15 minutos! Este teste foi desenvolvido por professores e linguistas certificados. O resultado sai na hora e com gabarito.

"Thus, simply studying a language for eight years (French) and five years (Spanish), as I did, did not amount to fluency."

PPAULO 50375 •6 •42 •914 Top Posters - 16 Jun 2017, 18:26
I wholeheartedly agree with the previously expressed by Judy. There´s the influence of what we have learned before, our vocabulary, background, even the anxiety to learn (and don´t show our weaknesses, or the need to communicate right at the moment).
Somehow we don´t see children stating that some point of their mother language is difficult, that it sucks, or similar statements.
From the teenager days on, they (we) learn that Maths, languages and other subjects are difficult, they suck, etc. They know then, that they have a challenge and that learning their language is a fact of life, and they learn it, or at least enough to to communicate.
It´s not our fault (lame excuse, but it works...), because we learn a code (phonetics, pronounce, the letters and even the "register" of the sounds.
Then we are presented a new code, we immediatelly to reverse to the previous one, that´s understandable.
Training, practicing is the antidote against the aquaplaning here, since we instinctively try to adopt aspects of one language into another, to transfer the knowledge of one to the other. This is perhaps one of the first and what peeves the new learner the most.
Interesting and funny, is that the learner of English has the same difficulties with the grammar (with little variation). The questions make a pattern of sorts, even when the student is a Chinese, Brazilian, Spanish and from some other countries!
Again, I agree with Judy when she says that in the scale of difficulty of languages we are in the same level, taking into account that the learner from abroad will instinctively to use the code he has learned to communicate/write in Portuguese, and vice versa.
Not to mention that learning a language is not only "the code itself", there are things that are embedded into the culture (of the country of the target language and that of the learner). One Brazilian (or European) that is used to say that a cat has seven lives, will have to add two more in the English-speaking countries (where cats have nine lives).
And before taking a picture, one will ask to say X in Brazil, there he/she will to ask to say cheese! So, that doesn´t have to do with grammar or teaching, to a degree. That´s why the learner must use a bit of independent learning, find English everywhere too, not only the one from the lessons.
Plus, English is available everywhere, in music, internet, technology, in the radio stations, TV, whereas Spanish, French or German - to name a few, isn´t so ubiquitous. So, they will be harder to learn. The immersion factor!
Votar 0

PPAULO 50375 •6 •42 •914 Top Posters - 04 Ago 2017, 16:26
Indeed they count the words that comes from other languages, and they keep coming all the time. So, they borrow, morph them into something English or in a blended form closer to the English sounds.
At the basic all languages are a bit easier, here perhaps people are talking about their difficulties at this level.
Not to mention the words and expressions from technology, the military, scientific area, sports etc, that trickle down into the everyday language.
So, someone coming from abroad will learn to get by in Portuguese pretty quick; conversely, we would express ourselves in not much time. The examples with the verbs given by your, for instance, might not be used in proper ways even by the conversant in Portuguese!
To illustrate the point, once in a blue moon (and to many not even in a blue moon) we would listen or read "correrieis".
So, for the sake of learning of language, in practical terms, many word forms are "almost nonexistent", I point that out so the learner of Portuguese from another country don´t think they have to master such boogeyman at begginer level or something.
Granted, to the study of verbs specifically you are right, though.
Votar 0