It takes two to fight, my father always used to tell me and my brother. brigar = fight (normal conversational English), have an altercation (more formal language).

He gave me a tick off does not make sense.

Esporro according to my dictionary means scolding, reprimand, reproof. Those words are a very high level of English and one would encounter them in literature.

A conversational word for dar um esporro, if my dictionary is correct, would be to say "He gave me a lecture, he gave me a talking to, he laid down the law, he told me off.

Metaphorically one can encounter these expressions: he gave me a dressing down, he raked me over the coals.

He yelled at me, means he raised his voice to you, talked very loudly either because you were very far away from him and he wanted you to be able to hear him, or he was angry and vented his negative emotion loudly. The word 'yell' can be neutral or negative depending on the situation.
Votar

MSeabra 10 Jun 2009, 01:57
If it's a more metaphorical or poetical situation, and not physical, we can also use struggle, as in "he was struggling to be free", or "there was a huge struggle for civil rights that time". 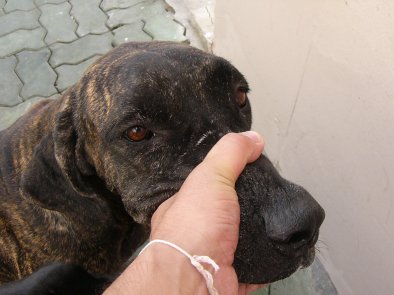 "(...) a learner who knows that to tick is to make a checkmark may have difficulty in understanding the sentence The teacher ticked off the student for being late, in which the phrasal verb to tick off means to reprimand or to express disapproval."