A pedestrian mall (also known as a pedestrian street) is the most common form of pedestrian zone in large cities. It is a street lined with storefronts and closed off to most automobile traffic. Emergency vehicles have access at all times and delivery vehicles are restricted to either limited delivery hours or entrances on side streets.
source = Wikipedia

Pedestrian zones (also known as auto-free zones and car-free zones) are areas of a city or town reserved for pedestrian only use and in which some or all automobile traffic may be prohibited. They are instituted by communities who feel that it is desirable to have pedestrian-only areas. Converting a street or an area to pedestrian only use is called pedestrianisation.
source = Wikipedia 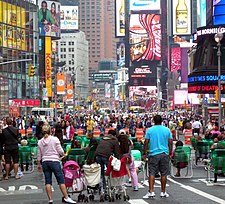 Marcio_Farias 1 24 213 Expert Member · 27 Ago 2010, 13:51
Have some of the streets of the city you live in ever got "pedestrianized"? Let us know your opinion on pedestrianization, if you have any. Do your city authorities plan on "promenading" more streets in your city, what do they think of "humanizing" the streets, does it keep hurried pedestrians from jaywalking, will pedestrianization make people walk together toward a better understanding of themselves and will this make friendship easier for them?

Let's have your say. But I strongly suggest opening another topic on the "Off-Topic" section for that. DO NOT DO THIS ON THE "Como dizer" SECTION.
Votar

Thomas-USA 27 Ago 2010, 17:28
The city of Santa Barbara, California, has a large area for pedestrians. I have not been there in years, but I think the name is "El Paseo". It seems to have been made for that purpose from the very beginning, not simply streets that were altered to keep vehicles out.

Santa Monica, California, has "The Promenade". It must be about six blocks long, and it is very popular with the locals.

In San José, Costa Rica, about ten blocks of "la Avenida Central" has blocked vehicular traffic. It's very nice to walk there and not worry about a truck running you down. It must be well over ten blocks long.

In Buenos Aires, there are many "peatonales" but none as famous as "la Florida". It is first class at one end, but slowly it gets grittier and grittier.
Votar

I posted it in the "Perguntas e Respostas" section. Thank you for the suggestion. I'm waiting for your answer there.
what-s-your-opinion-about-pedestrianisa ... 11429.html
Votar