Pull off, Pull over e Pull up: Qual é a diferença? 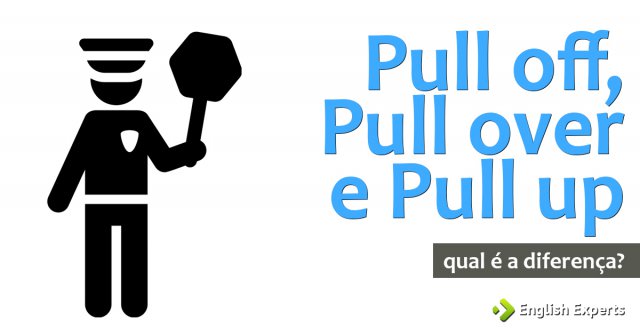 "The car pulled off and speed up the road."

To pull off, when referring to vehicles, typically is used to mean to leave the paved section of a roadway. A car that has pulled off a road is no longer on the road, and may now be on a different road. Often, stopping is implied. However, it would be possible to say "We pulled off the freeway and took surface streets to our destination." Note that the car did not stop in this example. This phrase works well with freeways, highways, tollroads, etc. On a long trip, for example, you will need to pull off the highway to buy gasoline. If a driver pulled off a street, however, we would expect him or her to enter a driveway, a parking lot, etc. The car is no longer on the street. No proximity is implied.

The police do not pull off a car that has been speeding. (See below.)

To pull over, when referring to vehicles, usually means to leave the main part of a roadway (not necessarily the paved section) and stop. A car that has pulled over on a road has stopped near the road and its wheels may be touching it still. If you were driving on a street, for example, you are probably now parked at the curb. You will not hear a native speaker say, "We pulled over the freeway, the highway, the street, etc." Nor will you hear, "We pulled over the freeway and took surface streets to our destination." However, you may hear "We were on the freeway/highway/street when we pulled over." Maybe the car had a flat tire, maybe the driver was sleepy, maybe a passenger got hungry, etc. Proximity is implied.

Yes, the police pulls over cars, trucks, motorcycles, etc. that have been speeding. (See above.)

As you can see, the meanings are close but not quite the same. Sometimes either phrase can be used, and sometimes one phrase is correct and the other incorrect. Isn't English fun?

To pull up means to arrive by vehicle.
The bus pulled up at six o'clock.
We pulled up early in the morning.
The truck is pulling up now.

To pull in is used like to pull up.
Has the bus pulled in yet?
We expect to pull in at San Francisco before midnight.

pull over, to direct one's automobile or other vehicle to the curb; move out of a line of traffic.
Ex.: The police officer told the driver to pull over.
Votar 0

cmallagoli 40 04 Dez 2008, 12:24
pull off: Informal. to perform successfully, esp. something requiring courage, daring, or shrewdness, bring off:
Ex.: We'll be rich if we can pull the deal off.
EX.: pulled off a last-minute victory.
Votar 0

Pull over e pull off : encostar o carro no acostamento

Definition
pull off (MOVE AWAY) phrasal verb UK
If a vehicle pulls off, it starts moving:
The car pulled off and sped up the road.

The car pulled off and sped up the road. --> O carro encostou/parou e acelerou/voltou para estrada.

to pull over : encostar ao meio-fio, desviar o carro para a margem da estrada,
pull over, to direct one's automobile or other vehicle to the curb; move out of a line of traffic.

Ex.: The police officer told the driver to pull over.

(The teachers have said the dictionary (cambridge) is completely wrong.)
Votar 0

I got pulled over by the police.

I got pulled over by the police.